Today we met Chuck and Rose Mary for lunch at "JOHN MULL"S ROADKILL" for barbeque.

We each had something different..chicken,pulled pork sandwich,brisket etc. They have very good Mac and Cheese.Took leftovers home for dinner. Line ordering and outside dining. Very good.

In the course of conversation a movie "Lady in the Van" came up and we decided to meet tomorrow at Chuck and Rose Mary's for drive to Regal Theatre on Sahara. If Maggie Harris had not been in it, probably would not have peaked my interest, but after seeing the movie,  so glad we went. She was perfect for the part. In case you are not familiar with the story, it is about a homeless older woman who lives in a van and manages to talk her way into the driveway of author and playwright Alan Bennett. She lives there for 15 years. I recommend for all to see.

We then came back for some time with Chuck and Rose Mary on the patio watching the rabbits and quail on the golfcourse. The rabbits are so cute. We enjoy our visits with them and look forward to seeing them again in October.

Thank you dear friends for a wonderful  visit and making us feel a part of your lovely family.

By the way, the 1,000 piece puzzle of an eagle in the shape of an eagle we gave Chuck for his birthday is almost finished.
I couldn't believe it. Should have taken a picture of it.  Great job, Chuck.

We were so happy to be included in Rose Mary and Chuck's 50th Anniversary party held at their son Jon and daughter-in law Melanie's home. Also in attendance were their other two sons, Cary and Carl and grandchildren Ian and Mia and many of their friends from Las Vegas.


The affair was catered and the food delicious as shown below. http://www.ggsgourmetcatering.com 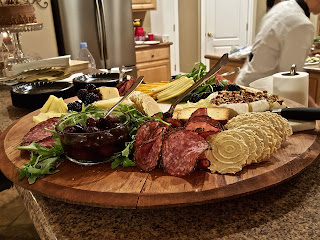 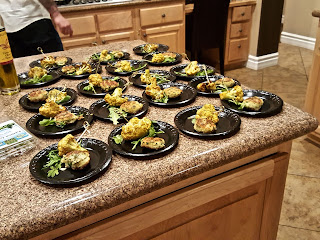 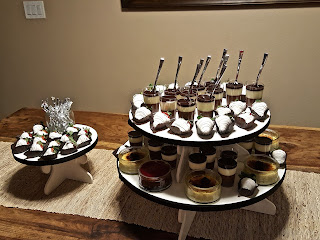 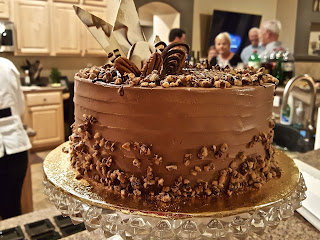 Carl gave a very moving tribute to his parents that brought tears and some humor to some reflecting on their years together as husband and wife and parents. There is a special family bond that continues with the grandchildren who love them very much.

We feel  so fortunate to have this special couple as lifelong friends and to have the opportunity to know their family.

John and I wish you continued blessings, love and health in years to come. God bless you.

Visit with Jill and Cliff in Lake Havasu AZ

Today we drove to Lake Havasu AZ for visit with our friends Cliff and Jill who moved here from San Diego two years ago. We first met them at Fleetwood RV in Decatur IN in 2013 and later reconnected in St Ignace MI, Missoula MT and San Diego. While in San Diego in 2014, they took us out on their Sailboat  and again in 2015 we met again. It is so nice to keep in  touch with friends we meet along our journey.

After a tour of their lovely home, we drove down to the Lake for a walk along the channel and then lunch at "The Turtle Grill" on the lake. It was fun watching the paddle boarders and pontoons.  Jill gave me a jar of "Chad's Bear Lake Raspberry Jam" that is made in Laketown UT. Can't wait to try it. They also recommended a very nice campground in North Fork ID.."Wagonhammer". Looks real nice so if in the area on one of our trips, will stay here. 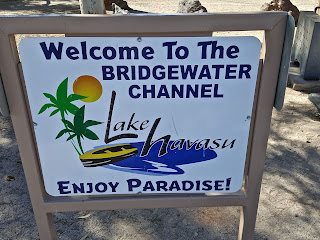 After saying our goodby, we decided to take the route thru Kingman and Boulder City via Hwy 95. Got back around 630PM. On the drive down we took Hwy 93 passing thru 3 states.

Tomorrow is the 50th Wedding Anniversary party for our good friends, Chuck and Rose Mary.

A relaxing day before meeting Don, Carolyn,Chuck and Rose Mary for dinner at Bistro Cafe in Aliante Casino and Hotel. We are celebrating Chuck's 79th and Carolyn's 72nd birthdays. Both couples have been married 50 years. Rose Mary and Carolyn were flight attendants for United and have stayed in touch over the years.  John and I are fortunate to have such devoted and  good friends since 1990.

Bistro Cafe has a quiet and elegant atmosphere with personal service. Spent two hours over dinner and then we went to Chuck and Rose Mary's for dessert. More good conversation and goodby's til next time.

Rose Mary gave Carolyn and me unique  pair of earrings and an avocado saver. Very unusual. Thank you so much. 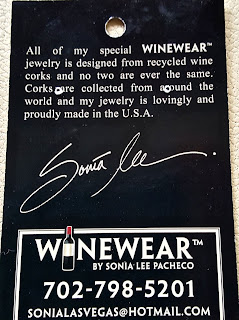 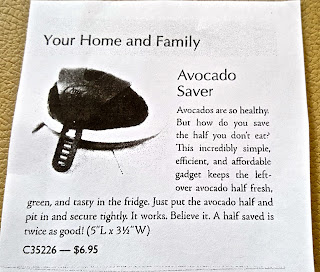 Carolyn and Don, have a fabulous time in Kauai. Chuck and Rose Mary will see you on Saturday at your 50th Anniversary party. Maybe next week we can meet for lunch at John Mull's.

Valentine Dinner at Panevino with Don and Carolyn

After Exchanging cards and taking our annual Valentine Photo and relaxing most of the day, we drove to get our good friends from Oregon, Don and Carolyn at their timeshare for a Valentine dinner.


I had made reservations at Panevino's Italian Restaurant. We are here last year with our campground group on Valentine's Day. The restaurant is located near the airport on 246 Via San Antonio.  The food is delicious and the epitome of Italian hospitality where guests are treated like family.

Don and Carolyn who are Wine Connoisseurs and Oenophiles after much discussion with the Sommelier, decided on a bottle of Brooks 2012 Pinot Noir. They also have a relationship with Brooks as they sold their Vineyard to them. Don and Carolyn had a winery and vineyard is years past called Hidden Springs. The story of Brook's Winery is quite interesting and suggest you google. brookswine.com


After much discussion over the menu, we made our decisions. Don ordered the Braised beef short rib risotto in a red wine sauce, Carolyn the Linguini Seafood, John the Eggplant parmesan and I the Scottish Salmon with vegetables and roasted potatoes. The service was very attentive. If you dine here, suggest you make reservations. Think they are closed on Sunday. Valentine Day on Sunday was exception.

We will get together with them as well as friends Chuck and Rose Mary on Tuesday for dinner at Cafe Bistro in the Aliante to celebrate Carolyn and Chuck's  birthdays.

So happy your visit worked out with our stay in Las Vegas. You are the ones who encouraged us to start RV'ing.Wish you were still doing this so we could meet up more often.

Lunch at Leticia's, Sunset and Woodpecker

Today we had lunch with Rose Mary and Chuck at Leticia's Mexican Cocina. It was a belated lunch for Rose Mary's Birthday. Thank you for recommending as it was delicious and a very nice atmosphere, not to mention the enjoyable company and conversation. We are so lucky to have friends like you to visit when we are in Las Vegas.


I had the Carnitas, a boneless pork shoulder seasoned with special herbs and spices and served with lime,pico de gallo, guacamole and chicharrones.  They have a very extensive and good menu focused on authentic family-style items and service. This is definitely a must when visiting LV.

We have a busy schedule next week when our friends, Don and Carolyn arrive for several days.
On Valentine's we are going to dinner at Panevino's . We went here last year with campground friends.

Then on Tuesday we are celebrating Carolyn's and Chucks's birthday with dinner at Aliante and then to Chuck and Rose Mary's for dessert. On Saturday the 20th, we are invited to their son Jon's for their 50th Anniversary gathering.

On Wednesday Pat and Darwin are planning a barbeque when more friends arrive in the campground.

Earlier in the week we had another beautiful sunset. 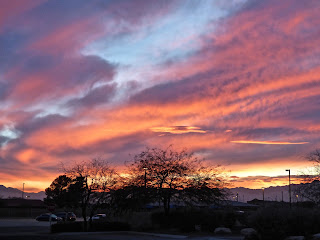 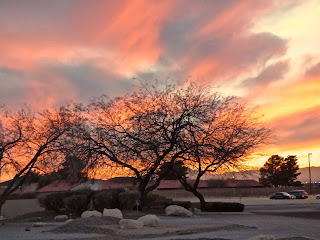 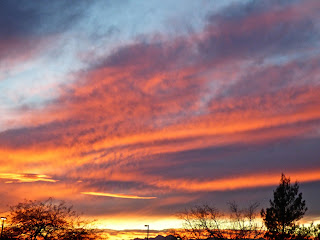 Yesterday I  spotted a woodpecker in the  pine tree beside the motorhome. Can't believe we have been here a month and just saw him. Think he likes the sap in the tree. It is not noisy.

Today we drove 100 miles to Rhyolite near Beatty NV off Hwy 95. Rhyolite is a ghost town in the Bullfrog Hills near the eastern edge of  Death Valley. The town sprang up in 1905 after a mining discovery with the biggest producer, the Montgomery Shoshone Mine purchased in 1906 by Charles Schwab. He invested in the infrastructure building a rail line, bringing in water, electricity, hospital,school, opera house, casino,bank and housing. 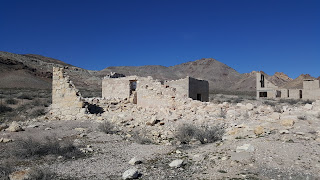 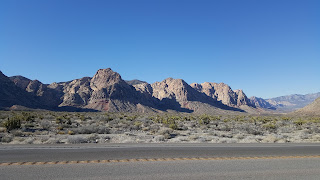 The town declined after the mine was exhausted and the 1906 San Francisco earthquake. By the end of 1910, the mine was operation at a loss and closed in 1911. By 1920 the population was near zero. Most of the buildings crumbled. The bottle house was preserved. It consisted of over 50,000 bottles. 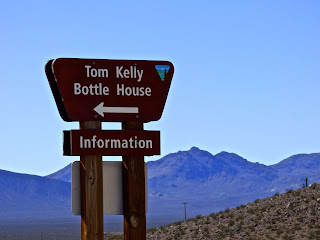 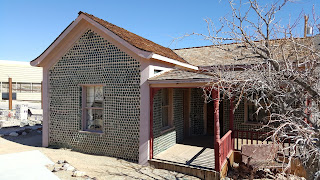 The town was named for an igneous rock composed of colored silicates.

I was somewhat disappointed as the small museum was closed. Good thing I took a picnic lunch which we enjoyed before leaving. Rattlesnake signs are prevalent, which gave me cause not to hike the area. 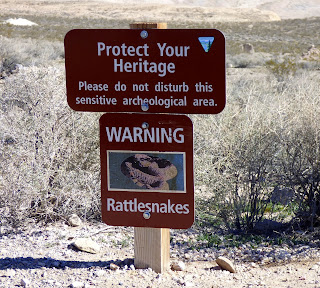 On our way home we decided to take the route back through Pahrump on Hwy 160. We were quite surprised at how spread out the town is and understand it is noted for the brothels..one in particular called The Chicken Ranch which offers free tours..We passed on this in spite of funny experience our friends Don and Carolyn related on their visit several years ago..only they can tell the story. May do that another time.

We did stop at Area 51 attraction on Hwy 95 to get gas, which was only $1.99. It consists of convenience store, brothel, campground and fireworks dealer.