Our days of departure are growing nearer. Our walks on Seal and Huntington beaches have given us serenity and more exercise.  Yesterday I got 8,000 steps or 4 miles. Really like the Whithings app on the iPhone..keeps me motivated.So far since February have done over 450 miles. On 11 October got the Baikal Badge. Lake Baikal is the world's largest reserve of freshwater located in southern Siberia. The 450 miles is the area of the lake.

Saturday, Seal Beach had a fireworks display celebrating 100 years. The display was visible from the campground. 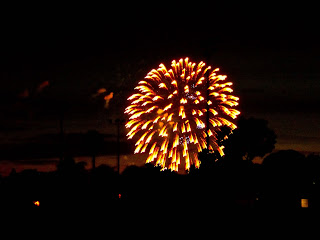 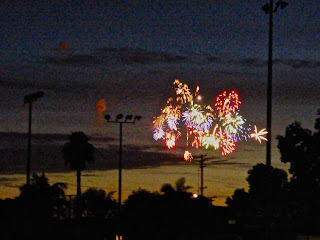 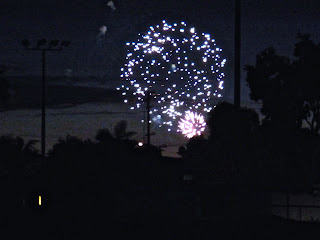 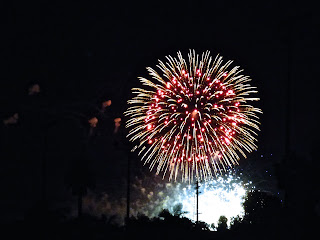 Surfers at Huntington Beach are always a joy to watch. 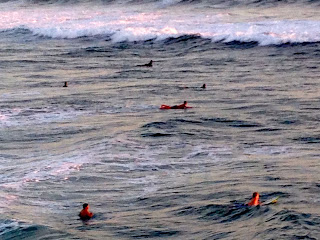 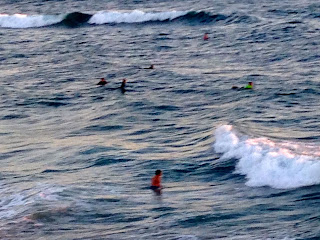 Last night got some photos of the Supermoon which is also called perigee at its closest point to earth less than 223,694 miles from earth.

Friend Carolyn emailed me the following and oh so true. We really are sleeping better and there is something calming and magical about the ocean and seashore. When my time comes, want to be scattered over the ocean as we did with three of our beloved dogs and someday Destiny. Still carry her ashes with us..just can't let her go,yet. 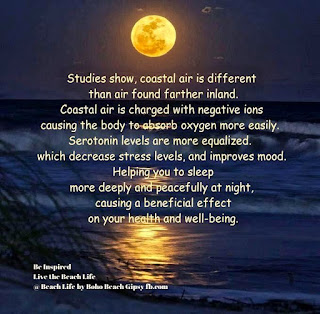 We found a good RV parts store here, Mike Thompson RV..much better than Camping World. John replaced the screen door lock and got a replacement for the roof part of the skylight over the shower. This he will replace when we get to Fiddler's Cove on Coronado and maybe look for a Mobile RV person to do this as well as the toilet base. Anyway, by finding these parts locally, saved us a bundle on postage. Should have waited to get toilet base here as I am sure  they would have had it in stock.

We departed Travis AFB Campground on the 19th spending 1 night in Bakersfield at River Run RV Park where we stayed last year enroute to Seal Beach. It is a nice campground within walking distance to Costco and restaurants.

Our last night at Travis brought a pretty rainbow. 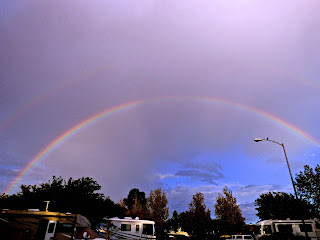 Our drive down IH 5 south through the San Joaquin Valley, now known as the dust bowl due to water restrictions. Such a shame to see what was once a very fertile valley slowing dying. Stopping for gas at Lebec which is where the major mudslide occurred last week and continued beyond the Tejon Pass. CA 58 south of Bakersfield is still closed. The drive from Lebec to Santa Clarita is very scenic, passing through canyons and Pyramid Lake. The mudslide has been cleared on IH 5 and traffic back to normal.


Rather than go through LA, we opted to cut off on 405 south to Seal Beach..traffic was at a standstill for over 30 miles. Not sure if this is the norm or due to accident.

As in times past, litter is still a major problem on the roads and highways. Think this is the most littered state we have traveled in all the lower 48. Maybe Jerry Brown should take a drive down IH 5 from his mansion in Sacramento to see for himself instead of preaching about sanctuary cities and global warming. There was one section where there seem to be a lot of accidents and the debris is left by the side of the road.

This is our 4th stay at Seal Beach NWS Seabreeze Campground. The park is full and our site #41 is by the marsh.The base is a protective area for wildlife. So far have not seen any herons, coyotes and the owl..only Ibis and ground squirrels.

When we arrived at our site, on the picnic table was a heart shaped rock that someone had left.
This was too surrealistic since I collect these on my walks for Hope. There is definitely a message here.

Below are pictures from last years spottings.

We will be here until the 2nd when we go down to Camp Pendleton on Del Mar Beach..our 3rd stay.

Our stay here will be relaxing and doing those odd chores.

Our days at Travis AFB Campground are coming to a close as we depart on the 19th for 1 night in Bakersfield before arriving Seal Beach NWS campground on the 20th until 2 November.

Last Saturday we made a trip into San Francisco to visit the Presidio, our 5th visit since 2009. This happened to be the weekend of fleet week and traffic was terrible so we decided to return back to campground. Plus the fog started moving in.

We also celebrated our 25th. So happy we found each other and have been so blessed with our family and love. Everything in the right time and place.

On Sunday we discovered that our friends, Dale and Linda, whom we met at Whidbey May of 2014 and who are from Redmond were camped across from our new found friends Jim and Gloria. Dale recognized John and I must admit I was oblivious. It is not as if we only met once, guess I was not expecting them. We met Jim and Gloria who are from Florida and fulltime RVer's when we were at McChord AFB campground. Invited them over for dinner on Tuesday. Had a good visit. Hope we meet up again.


Dale is a fish carver and he and his brother,Ed, whom we also met at Whidbey carved two fish for Colt and Cade. Check out the webpage thenfcg.com.National Fish Carvers Guild. Stopped by yesterday to see Dale starting a new carving..takes hours and very tedious. Thanks againEd and Dale for the boys carvings.

We have had some pretty sunsets while here and, of course, the jack rabbits are cute..especially their big ears. 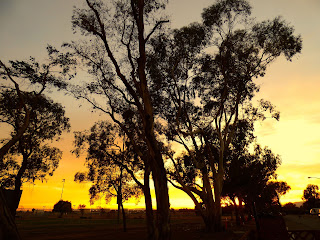 Have spent most of time finalizing our journey until September 2016. Only a couple sites need to be firmed up and they are not taking reservations at this time. I will now start planning our 2017 journey to NewFoundland and Labrador as to the places we want to stop and tour. This will complete our tours of the 10 provinces of Canada. Think my planning ahead come from my days as a flight attendant and travel consultant.

A drive into Mountain View CA..1 1/2 hours..took us to the Computer History Museum, Moffett Field and the Winchester House.

John was in Tech Heaven with the visit to the Museum bringing back many memories from military to present days. Over the years he has lost tract of the number of computers he has used and owned. In 1976 he built an Altair 8800. He said I made him throw it out.He still has copy of the Popular Electronics magazine. The museum has some very interesting exhibits exploring the history of computing and is home to the largest international collection of computing artifacts in the world.The exhibits bring to life computer hardward,software, documentation,photographs, histories and moving images of the first 2,000 years of computing. 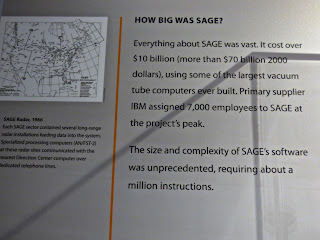 The Babbage, a 150 year old computer, designed by Charles Babbage in 1849, but failed to be built until 1991. A demonstration is  given daily of its operation.


On display is the driverless Google car giving you the opportunity to get up close and learn how it works. Think I will stick to our 2003 Malibu.

Got John's picture by the Cray 1.

After lunch in the Cafe,we stopped at Moffett Field which is now home to NASA AMES RESEARCH CENTER. The Moffett Field Museum is open to the public and houses displays and artifacts of military history from the 1930's to present. Moffett Field was home to a lighter than air squadron sub-chasing blimps,supersonic jets and strange experimental aircraft.In it final days it was the Pacific Command Center for P-3 Orion Sub hunters. NASA is now custodian of the base.

Hangar One's floor covers 8 acres and could accommodate seven football fields. The USS Macon was still a tight fit. After the Macon was lost at sea, the  hanger was used for maintenance shops, laboratories, offices and facilities for blimps and aircraft.

In 1997, it was discovered that the siding was leaching toxic chemicals and the skin  was removed leaving the frame. Google made an offer in 2012 to restore the siding reserving some of the space for a museum using part of the space for parking their private airplanes;however, the offer has been met with silence from NASA.

Continuing on we made a brief stop at the Winchester House. We were disappointed to learn that you cannot take photos inside the mansion, so decided instead to just do an outside garden walk. The inside tour takes over an hour and covers 110 rooms at a cost of $25. 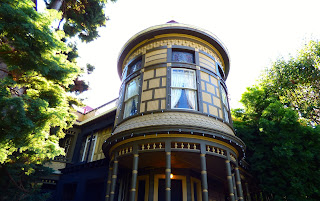 It took us over 2 1/2 hours to return to Fairfield with traffic at a standstill on 680. How do these people do it twice a day?Couldn't pay us enough to work and live here. Stopped at "In and Out" for a burger..first one since Texas.