Sunny skies and mild winds for a Ferry ride from Anacortes to Orcas Island in the San Juans. We were last here in the 90's and took a biplane ride over the islands. Rather costly $299 for two, but worth every cent. Today we opted to just drive around the Island from Westsound to Doe Bay.Orcas known as the "Emerald Isle"is 57 square miles of curving rural roads.

The 1 hr ferry ride at a cost for vehicle rt is $51 and reservations recommended. The ride takes you through the Rosario Strait passing Lopez, Blakely,Decatur and Shaw Islands with a stop at Shaw. Last year we toured San Juan Island arriving at Friday Harbor. The waters were calm and the ride very peaceful. On our trip next year, we will tour Lopez and Shaw Islands.


Below are some photos of the crossing and view of Mt Baker. 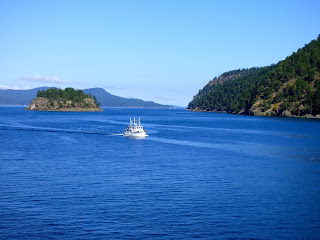 Our first stop was in Eastsound,a charming hamlet of artisans,restaurants and shops. Took walk through town and stopped at the Brown Bear for some muffins.After a picnic stop beside Rosario Lake, we drove to Moran SP for a stop at Constitution Mountain,the highest point in the San Juans at 2.409 ft and to walk up the stone tower for a stunning views of the Cascades,Mt Baker, San Juan Islands,Canadian Gulf Islands and Vancouver Island. Moran SP opened in 1921 when shipbuilder magnate, Robert Moran donated 2700 acres and another 1,000 acres in 1928. Today the park consists of 5200 acres. The park features camping sites, hiking trails and abundance of wildlife. Guess the wildlife was on vacation as we only saw several deer.

On our return to Westsound and the ferry terminal, we stopped briefly at Rosario Resort which was once the home of the Moran's.Moran sold the home in 1938 for $50,000 to Donald Rheem. In 1958 it was sold to Texan Ralph Curtain,but financial woes forced him to sell it in 1960 for $225,000 half the original price to Gil Geiser of Seattle who opened it as a resort. It has a beautiful setting on East Sound.

While waiting for the ferry,we walked down to Mamie's for ice cream. We finally returned back to campground around 7:30PM.


Tomorrow evening we are joining campground friends for seafood buffet at Swinomish Casino.


Saturday, if the weather is good,we want to drive the Mt Baker highway.