Today we drove to Port Gamble, a National Historic Landmark since 1966 on the Olympic Peninsula via a short ferry ride from Whidbey Island Coupeville to Port Townsend. The town is located on the Hood Canal via Hwy 20 to 104.

When we started out for the purpose of finding location of blockhouse,we had no idea of the beauty of the town. William Talbot and Andrew Pope erected a sawmill on Gamble Bay in 1853 that remained in operation until 1995. Even though the mill is gone, the little town of Port Gamble that grew up around the mill remains. The mill supplied lumber to the San Francisco market.The town that grew up around the mill reflected the architecture of New England where Pope and Talbot were born. Port Gamble was and still is a company town. Besides San Francisco, lumber was also shipped around the globe. It burned sawdust to power a "flouring" mill.Nothing remains of the blockhouse or mill.

Olympic Property Group in a long term commitment to the town, maintains the houses, buildings and common areas. The museum behind the General Store is a must before starting the walking tour. For more info go the portgamble.com web page.

There is a beautiful Zinnia garden in front of the Post Office as well many hanging baskets around the town. Homes are available for lease. We enjoyed a nice picnic in the park. 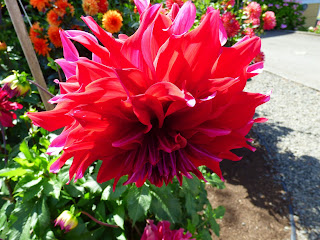 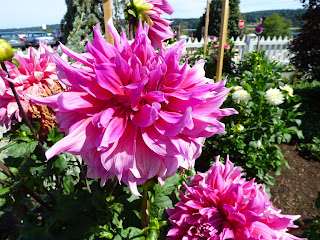 Returning to the ferry we stopped at Forts Townsend, Flagler and Worden. Will not write about this as we have been there many times and have posted blogs. Did get a deer photo at Worden. 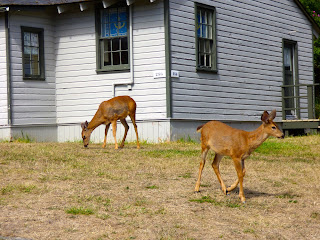 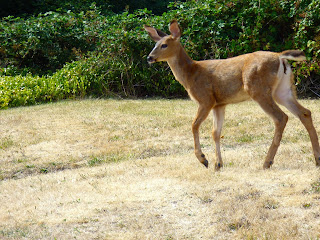 Rain is in the forecast for the next 5 days..much needed..too bad it wasn't here a month ago.

In the morning got some photos of eagle and heron. A walk on the beach found some more heart shape rocks for Hope. The top two were given to me by friend  Monika.

The day started with a drive to Clinton on the southside of Whidbey to take the ferry to Mukilteo and a drive to Seattle for the purpose of getting photos of markers for Forts Decatur and Dent. When we got to the location for the Fort Decatur Marker, even John who will go to great lengths for a photo, would not get out of the car. The marker is located in a park on 3rd Ave and Jefferson Sts. The park is now riddled with over 100 homeless and drug addicts giving an appearance of unsafe conditions..not worth taking a chance for a photo. The park is located near city hall and other government buildings, but seems no one cares. A sad situation.

The Fort Dent marker is located in a much better area between IH 5 and I 405. There was a huge youth soccer tournament in the fields, but we were able to get a photo of the marker. The traffic on IH 5 northbound was bumper to bumper so we decided to take the 405 bypass..good decision.

On the way back we decided to have dinner at Bob's Chowder House in Anacortes. We wanted the fried clams, but alas they were out.
So we had clam chowder. John had fried oysters and I a salmon sandwich. We dined here last year and will probably go again before we leave for the clam strips.

After dinner we drove up to Mt Erie which is the location of an old AF Gap Filler Radar Station that is now a communications center.

There are beautiful views of the Islands, Lake Campbell and Anacortes from the top. We want to return when there is less smoke in the air and maybe mid morning. On one of the paths toward a viewpoint there is a memorial stone to Jonathan Leland Glass who fell to his death on 26 August 1997 at the age of 13. Brought tears to my eyes. On another path is a sculpture of an eagle who guards the mountain. The park features many hiking trails. If in the area, be sure and take the 1.8 mile drive to the top.


In the evening, a beautiful sunset at campground. 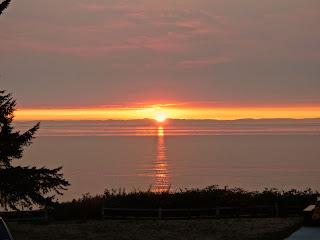 On our walk this morning spotted a bald eagle so just had to get some photos. They are such magnificent birds. Also got a photo of a cute rabbit..hope the rabbit is not the eagle's lunch. 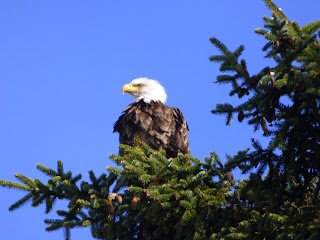 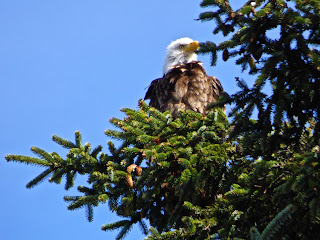 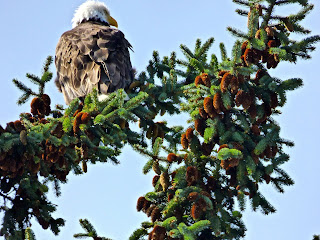 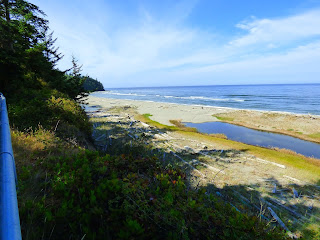 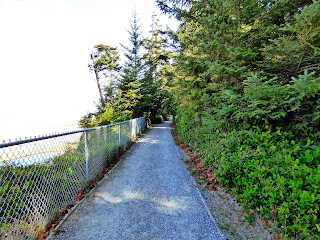 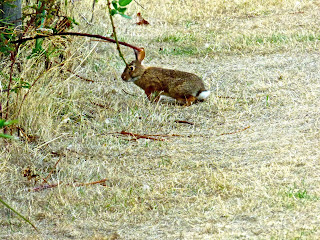 Flowers abound in the campground thanks to Ken,full time host. 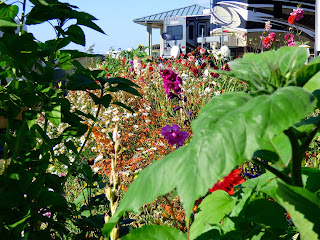 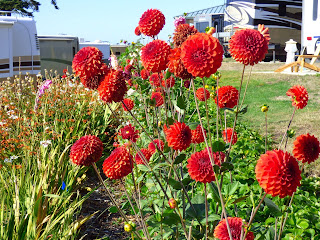 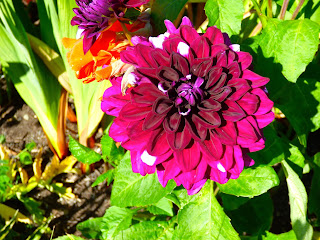 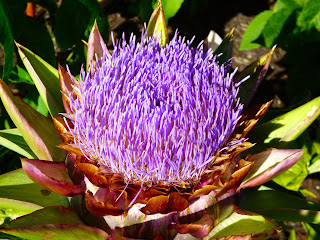 Our drive today from Salem or Whidbey Island took about 6 1/2 hours via I5. Instead of going through Portland,we opted for the 205 bypass putting us back on I5 in Washington. Approaching Seattle we decided to take the 405 bypass to I5 north of Seattle. Traffic bad on this also. Taking exit 230 at Mt Vernon to WA 20 to Whidbey Island and our home until the 16th September at the NAS Cliffside campground is a pretty drive passing Deception Pass. We stayed here last May of 2014 and is one of our favorite campgrounds located on Juan de Fuca Strait with a view of the San Juan Islands.


The park is full with retired and active military at a cost of $30/day which is reasonable for the location. Convenient to Oak Harbor and Anacortes as well as LaConnor. In fact we went to a walkin clinic in Anacortes last night  for John to get his stitches out. This is also where we will get the ferries to the San Juan Islands.

We took a walk last night looking for the resident eagle,but he must be fishing somewhere else. Got some great pictures last year. As we were settling in,spotted some whales in the distance also  some riders on the beach..looks like fun.This cooler air is such a relief from the 100 degree heat in Oregon. We ran into Mike and Monika, a couple we met last year who were hosts last year.