The one area still awaiting our viewing is the Norris Geyser Basin and since this is our last day, got an early morning start.

Norris Geyser Basin is the hottest and oldest thermal area in Yellowstone with two walkable zones. The world's tallest geyser at 300 ft plus is located in the Back Basin and named Steamboat Geyser. It last erupted in September of 2014. I only did the Porcelain Basin walk which is around a mile loop and features some very colorful geysers. 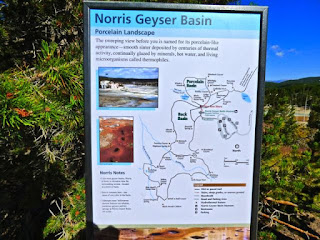 Norris is part of one of the world's largest active volcanoes and is near the intersection of three major faults.

Below are some photos taken as we walked around Porcelain Basin. 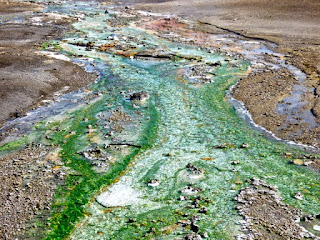 After this we walked down to the Steamboat Geyser which is 1/4 mile from the museum. John opted to do the entire walk around Back Basin which is 2 1/2 miles. I just did not feel up to it so returned to the car. He did say upon his return that Porcelain Basis was the most scenic.


On our way back, another Bison Jam coming into the park. Fortunately, we were heading out. Think it is the same Bison causing the jams. Maybe it is time to relocate him.