After touring Norris Geyser, we decided to do the scenic drive on 287 to view the Madison Canyon Earthquake Area which is 30 miles from West Yellowstone. 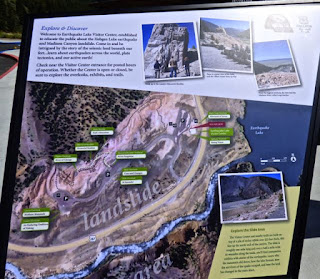 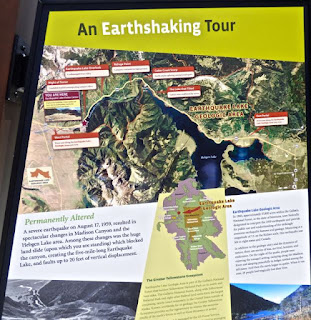 On 17 August 1959 on a beautiful moonlit night at around 11:37 PM, one of the most powerful earthquakes in the Rocky Mountains struck Madison River Canyon and known as Hebgen Lake Earthquake. It measured 7.5 and caused a massive landslide sending 80 million tons of rock crashing down and blocking the Madison River and forming what is now known as Earthquake Lake.Today the lake is 200 ft deep and 6 miles long. The land under Hebgen Lake tilted upwards and cabins on the north shore were immersed in water. Three sections of Hwy 287 fell into the lake,trapping hundreds of campers. 28 lives were lost.


The effects of the quake were felt as far away as Seattle and in Idaho and Wyoming.

It is hard to believe that this scenic and serene valley was dealt this horrible tragedy.