Scenic Drive to Ouray and Silverton

After visiting the Fort Uncompahgre we decided to drive down to Ouray. John remembered coming through this town back in late 50's and remembered it being very scenic. I must agree. Ouray is located near the Four Corners on Hwy 550 in southwestern Colorado. The very scenic Red Mountain Pass connects Ouray to Silverton. Weather in Ouray brags of 285 days of sunshine with moderate temperatures. The town displays a Victorian architecture nestled in a canyon at the base of the San Juan Mountains. The beautiful mountain views has earned it the nickname "Switzerland of America". Waterfalls, hot springs, mountain peaks and wildlife teem in the area. This is also much for the outdoor adventurer as well. Ouray is also known as the Jeeping Capital of the World. From the town are many scenic drives, many requiring 4wheel vehicles. You can also rent a jeep. Be sure and visit Box Canon Park and view the roaring falls. We have put this on our list to return. We had lunch at "Backstreet Bisto" on 7th St. 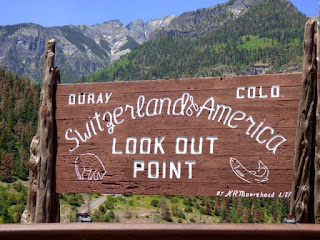 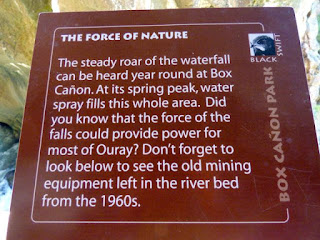 Below are photos of Box Canon waterfall 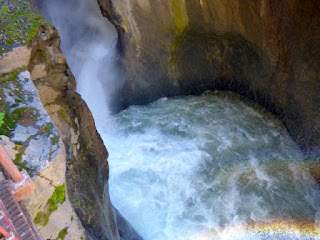 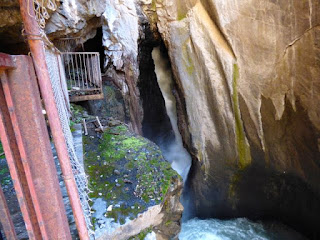 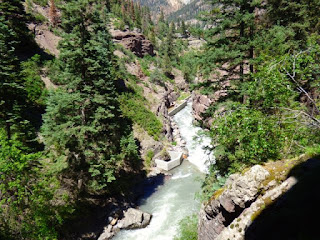 Continuing on 550 toward Silverton, we stopped for several photo ops. The highway has no guardrails as this allows the road to be plowed in the winter as the snow can be pushed off the edge. I must say, I was somewhat on edge for part of the trip. Would never take a motorhome on this part. Known as the Million Dollar Highway, it was originally built in 1880 as a toll road collecting $3.75 per vehicle. After getting a deer picture, our first stop was Bear Creek Falls. Continuing we caught views of Red Mountains towering above Ironton Park. The bright red tones are caused by oxidation of the iron in the soil. There are many abandoned mines in the area.

Upon arriving in Silverton, we were able to get photos of the Silverton Durango Railroad as it was preparing for departure.

Since the day was growing late and we wanted to tour Colorado National Monument, we started back to Grand Junction.

We really could have used one more day here.
Posted by Amy at 6:32 PM