Today we went to Peterson AFB to visit the Peterson Air and Space Museum. The Museum is named after Lt Edward J Peterson who was the first Coloradan to die in WW II. The base is home to the 21st Space Wing, Air Force Space Command and Norad. The Museum features different types of WW II aircraft, Cold War Interceptors, surface to air missiles, ICBM Missile Trainer and Launch Control Mock-up. 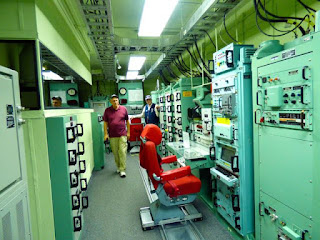 Also exhibits on the Texas Towers radar facility in the Atlantic Ocean and on which John served in the late 50's. In fact he was serving on Tower #2 when tower #4 was destroyed during a hurricane.

Another feature is the Cheyenne Mountain exhibit.

The museum is open Tuesday thru Saturday; however, due to "bravo" alert status on US Military bases, non military is not permitted until alert goes to Alpha. Our guide mentioned that due to this restriction visitors had decreased by 35%.

The Visitor Center used to be the passenger terminal for the Colorado Springs Airport which is now adjacent to the base.

Our guide,Jim was very informative and gave us a great tour. Thank you.

Later in the afternoon we drove up to Bill and Lorraine's in Castle Rock for a real treat. We met them at Nellis AFB. I got to see sweet Misty again, their rescue Greyhound. She is so calm and a pleasure to be around. After a delicious dinner of ribs,baked beans, slaw and fruit salad, we were too stuffed to eat dessert so took our share home for tomorrow. Bill until his retirement several years ago was band director for the Academy. Thank you friends for a delightful evening. By the way, on the way home we had thunderstorms until Monument. They will pay us a visit next week.