It was a 2 1/2 hr drive to Fort Union via IH 25. Take exit 366 and drive the 8 miles to the fort. There is no admission and the fort is open daily from 8-4 and 8-6 during the summer. Stay on the trail due to rattlesnakes and be prepared for the 7,000 ft altitude. The fear of maybe seeing a snake and the altitude prevented me from walking the 90 plus minutes of touring. I did make an attempt, but ended up back in the car while John toured so most of the photos are ones he took. 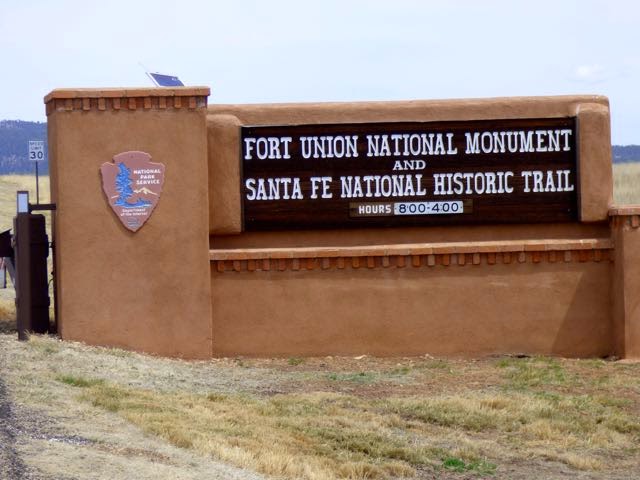 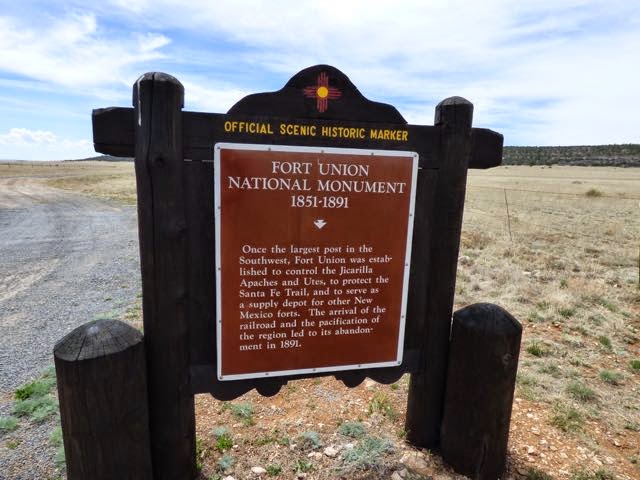 When viewing the remains of the adobe buildings, it may be difficult to realize that this was the largest US Military installation on the 1800's Southwest frontier that existed from 1863-1891. The first Fort Union was from 1851-1861 and consisted of a group of shabby log buildings established to protect travelers on the Santa Fe Trail and provide a headquarters for the Ninth Military. Later the Ordinance Depot was built on the site. 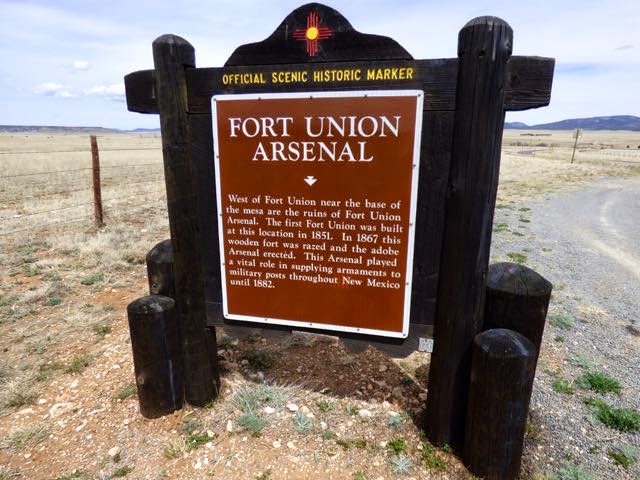 The Second Fort Union built in 1861 consisted of a star shaped earthworks to defend the Santa Fe Trail from Confederate invasion. It was abandoned after the invasion was turned back in 1862.

The third and last fort was erected between 1863 and 1869 and consisted of the military post serving as the principal supply post for the New Mexico Military Department. The buildings consisted of a quartermaster depot,warehouses,corrals, shops,officers quarters and barracks,hospital, commissary,military prison and mechanics corral. The  fort continued to flourish until the railroad replaced the Santa Fe Trail and the fort was abandoned in 1891.


During the 1860's and 1870's troops from the Fort continued in operations against tribes of Indians when peace was finally brought to the southern plains in 1875 on the white man's terms. The garrison continued to track down outlaws and mediate feuds.

The location of the Fort situated on a barren plain 3 miles from the nearest mountain bring thunderstorms, hail, strong winds and an occasional tornado during the summer. Driving in I saw several pronghorn.


On the way back we stopped at the Owl Cafe in Albuquerque just off IH 40 and Eubanks at the recommendation of our friends Ken and Connie. It is a fifties diner featuring fare of the era with many types of exotic milk shakes. John and I got the Max bleu burger with sweet potato fries and lemonade. Service was great and atmosphere interesting. There is also the original one in San Antonio N Mex.