Week of Fun with Family

We are enjoying our stay with Hope, Shawn and grandsons Colt and Cade. This past week has been filled with horses Rocky and Katy,morning of Putt Putt with the grandsons and grape stomping at Maragas Winery.  Auto Body Concepts in Bend did a great job in repairing the headlight on the Malibu that was damaged by a fish carrying Eagle. The fish did the damage when the eagle dropped it. Also did some repairs on tow mechanism and just other daily chores. Boys start school on 2nd. Could not believe all the supplies required. Seems when I was in school..only a notebook, paper and pencils to be added during school year as needed.

Shawn saddled up the horses for boys to ride. Cade especially enjoys this and wants another horse. I want to ride Katy before we leave. Have been spoiling them with carrots.

Cade gave Diggie a bath. Think they are going to keep her and maybe she will have some piggies.


Oreo is pregnant and due in December. They now have 4 heifers.


Took Colt and Cade to the Putt Putt in Bend..played 18 holes and must admit they did better than Papa and Nana. It was fun and we may go back again. The Sun Mountain Fun Center features bowling,go karts,bumper cars and games Great place to take kids.

On Saturday, Hope,grandsons and I went to the Maragas Winery for grape stomping. The Maragas family has been in the wine making business for generations starting in Crete and in the USA 1941. The winery is located on Hwy 97 between Redmond and Madras in Culver and is the first winery in Jefferson County Oregon. Hope and I had a glass of 2012 Malbec made with Applegate Valley fruit.
The wines range in price from $18 to $45. Check them out on google. maragaswinery.com

After sampling the wine we participated in a grape stomping..first time for all of us.

Arrival Fairchild AFB and Redmond OR

Our drive today from Columbia Falls MT to Fairchild AFB in Spokane was around 4 hours via Hwy 93 on the West side of Flathead Lake to Hwy 28 and 135 to IH 90. Intermittent rain and clouds most of the way.

We will be at Fairchild for only 2 nights as we are anxious to see Hope and family in Redmond OR where we will stay until the 22nd of September before heading south for the winter in California and Nevada as we did last year.

The RV Park is very nice and quiet..a bargain at $20/nt with full hookups. The base itself is one of the quietest on which we have camped..seem to be little activity. 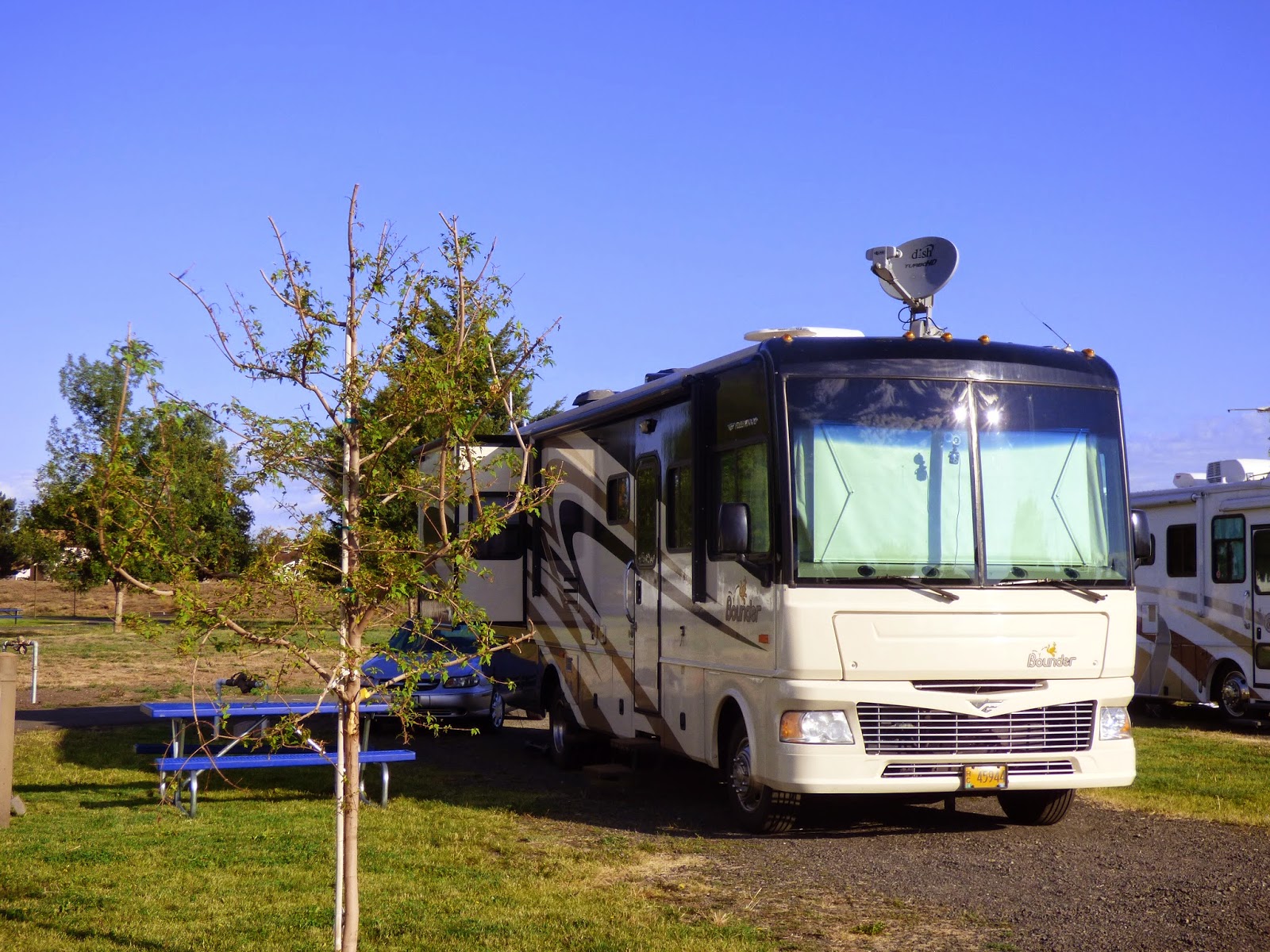 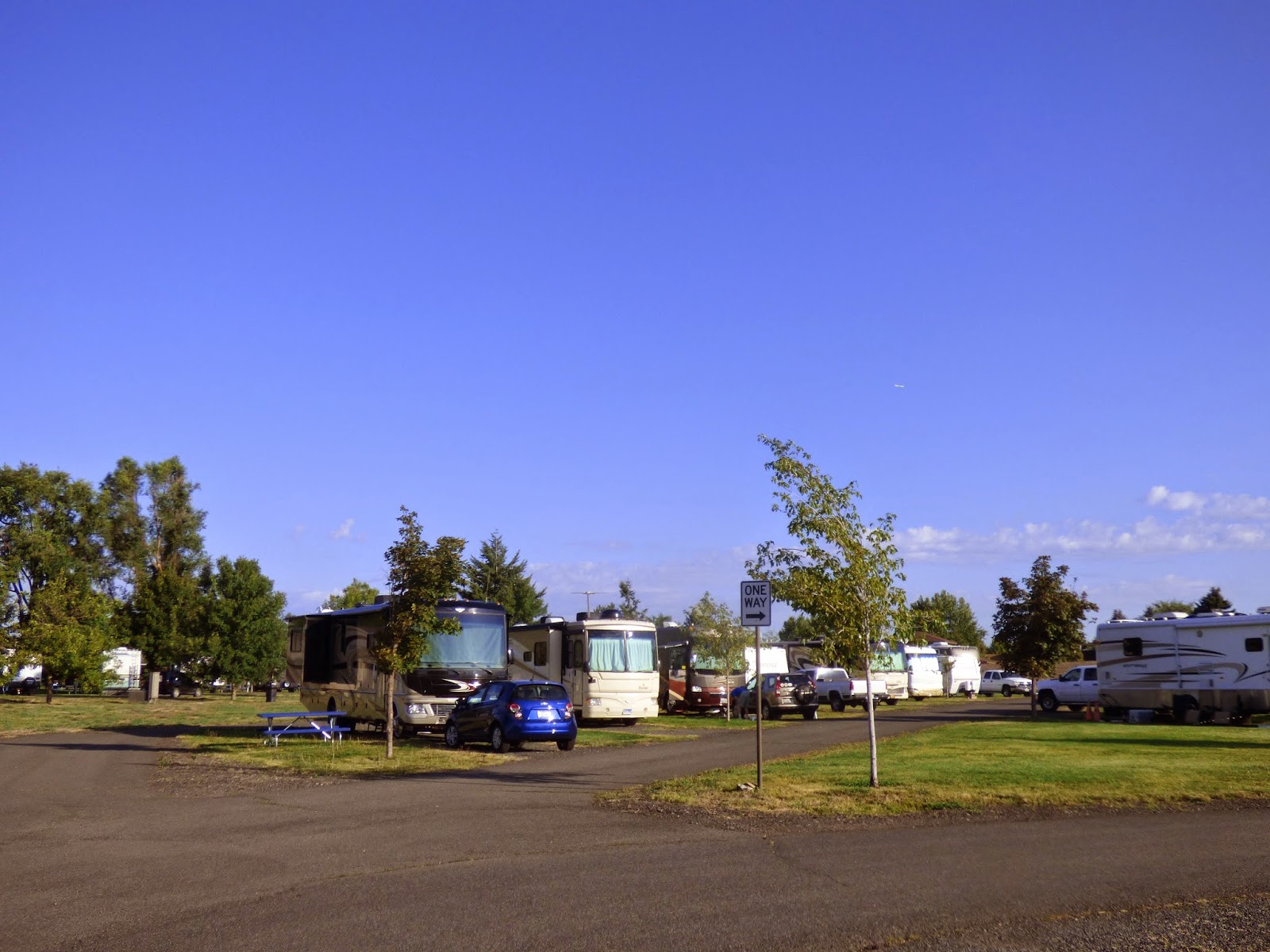 On Thursday we decided to drive to Moses Lake as John wanted to get some pictures of a now closed AF station which is now a community college and the airport. Not many buildings left, but at least the property has been put to good use.

We decided to drive up Hwy 17 to 155 and Grand Coulee Dam. We stopped in Soap Lake for lunch at the Weiner Cantina. One of the best and generous sandwiches we have had. The drive was very scenic and interesting..most unusual landscape passing Soap,Lenore,Sun and Banks Lakes. Soap Lake is known for its mystical healing qualities. Sun Lakes has some nice RV parks. 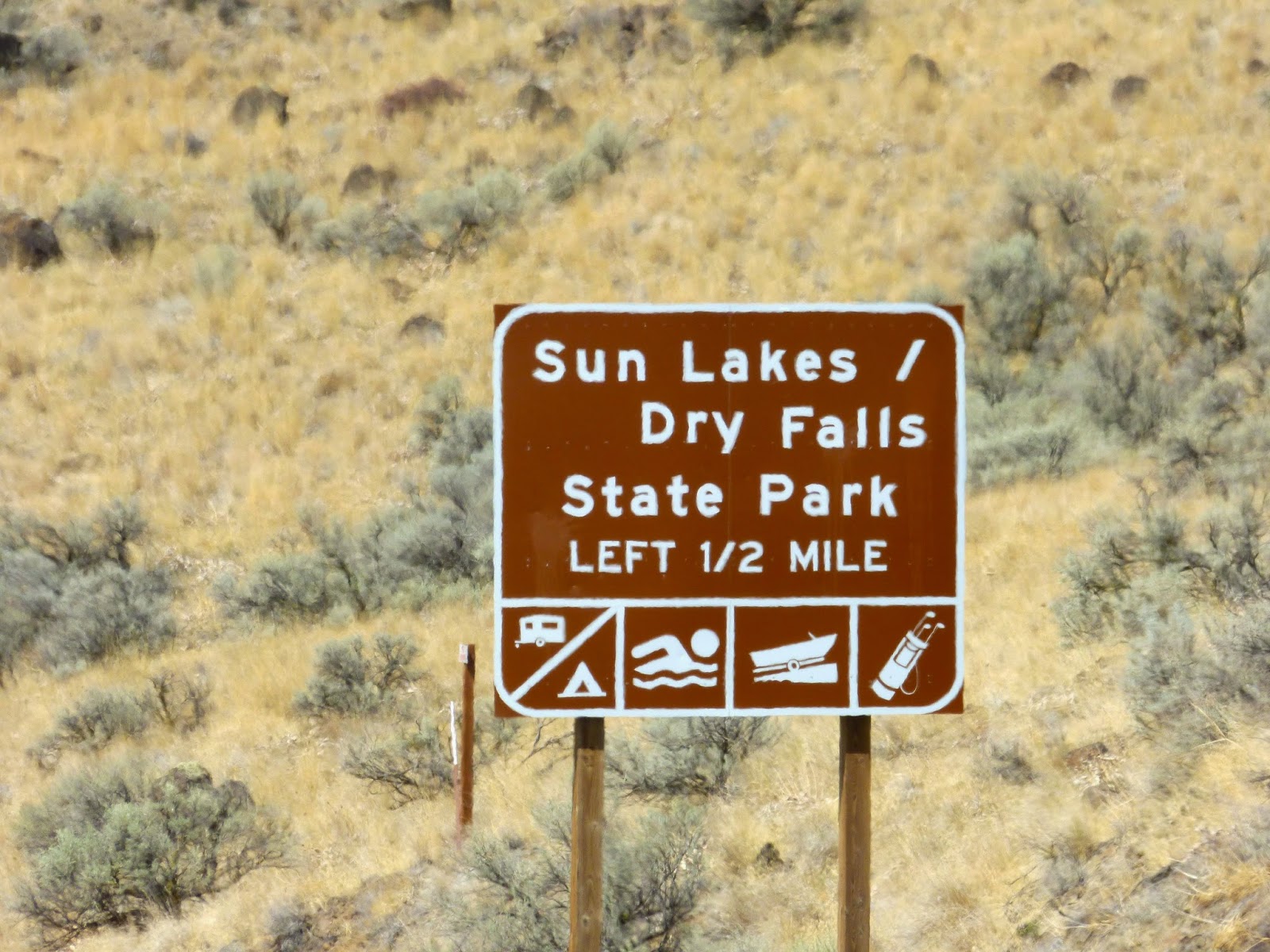 Stop at the Dry Falls/Sun Lakes Visitor Center for spectacular views and history of the area. Dry Falls was formed when massive glacial floods poured over the basalt cliffs some 14,000 years ago. Even though dry now, at one time the falls was five times wider and 2 1/2 times higher than Niagara Falls.

We then passed Steamboat Rock, a huge basalt monolith rising some 700 feet above Banks Lake.


Grand Coulee Dam was begun in 1933 and completed in 1942. This is one of 11 dams on the Columbia River in the US and generates more power than a million locomotives. Water irrigates more than 600,000 acres in the Columbia basin annually. We were disappointed that only a trickle of water was flowing today.

Our drive today took us IH90 to Hwy 395 to IH 84 and Hwy 97. A long 8 hour day, one of our longest. We stopped at the Mercantile just north of Pasco..a must if in the area on Hwy 395. Had lunch and got some homemade burritos for dinner tonight.

After departing Redmond last of April, we finally arrived back. It was so good to see Hope,Shawn and grandsons. Their garden looks so good and met the new cattle additions..the cow is pregnant and due in December. Will miss the rabbit and pigs. Bought a supply of carrots to feed the horses, Katy and Rocky. Casey is making the Bounder her 2nd home. Grandsons have grown. We are happy to have a nice RV pad overlooking the mountains. John and Cade spend Saturday washing the filthy Bounder.