Today we drove up Hwy 97 north to visit Fort McLeod located on McLeod Lake and in the Provincial Park with a return stop at the Historic Huble Homestead and Giscome Portage. There are only remaining 4 buildings not open for public viewing and the Tsek'ehne Cemetery. The fort was established in 1805 and site of first fur trading post built by the North West Company and later the property of the HBC.


On the way up we spotted a huge Bald Eagle on the side of the road with what appeared to be a huge fish. As he took off just in front of us he dropped the fish and the impact caused damage to our right headlight. Fortunately, the eagle circled back behind the car and appeared to be OK. We stopped at a small country store to purchase duck tape so we wouldn't lose the headlight.

While driving to the Huble Homestead, we spotted two bear cubs..one crossing the road and another further down beside the railroad track. Unfortunately, did not have my camera ready for any of the sightings. Maybe we need to start taking the dash cam with us in the car.

Before the Huble Homestead was established, the Giscome Portage came into being as a result of an article written by John Giscome, a black man from Jamaica who was seeking gold.  In 1862 he was seeking the best route to the Peace River area and a native guide showed him the best route. The portage is 9 miles and runs between Fraser River at the Huble Homestead and Summit Lake. The Lheidli T'enneh called the trail "Lhedesti" meaning shortcut. The trail saw little use until the 1871 gold rush. The trail was widened into a wagon road. Giscome retired a wealthy man in Victoria and died at age 75 in 1907. His estate valued at $21,000 was left to his landlady.

In 1903 Albert Huble and Ed Seebach had traplines in the vicinity of the Portage and saw the importance for transportation and built a store trading furs,supplies and guiding settlers through the Giscome Rapids. In 1909 steamboats made regular stops on the Upper Fraser River. The Giscome Portage community thrived until 1915 when settlers left to join the war. In 1919 the Huble family moved to Prince George and the property was sold to Josephine Mitchell in 1929. Over the years it has seen several uses and owners until 1989 when it was turned into a Regional Park and Historic site. For more info go to www.hublehomestead.ca 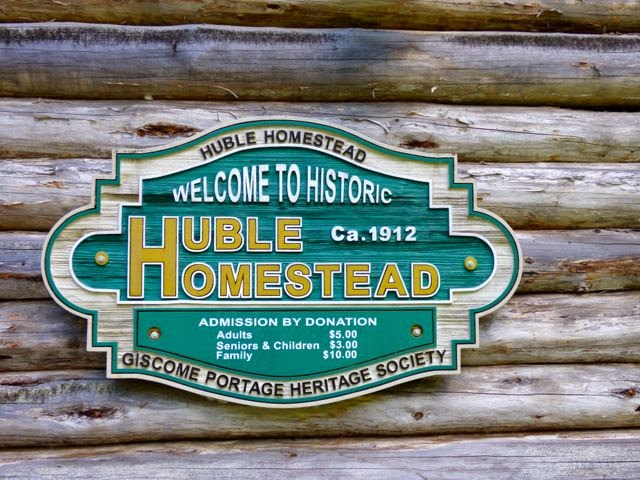 The Welcome Barn is the starting point for tours and features displays of the Homestead history and meeting area. It was reconstructed in 1989. The original barn housed the cattle and horses as well as storage and implements.

Seebach Cabin was thought to have been built in 1930's and likely used by ranch hands working on the Mitchell ranch. It was restored in 1992 portraying the living quarters of a fur trapper. It now rests on the original property of Edward Seebach who died in 1932.


Flat Roofed Cabin was reconstructed on the original site. The original building was the pre 1911 home of Huble and Seebach. It was later used as a workshop and guest house after Huble constructed the family home.

Huble House turned 100 in 2012 and the oldest building in the Regional District of Fraser Fort George. When Albert Huble returned from Ontario with his new wife, Annie he set out to build the home. It was a squared log home with dovetail corners. The cabin he and Annie had been living in for the past year was attached to the new home and used as a kitchen. In 1929 after the homestead was purchased by Josephine Mitchell, it became her summer residence along with the 336 acres.


The Meat Cache was used to store meats and other food out of reach of predators.


General Store and Cafe and has been reconstructed from photos and recollections from the original 1913. We had lunch and perused the many items for sale from local artisans.


The original Warehouse was built in  1910 and became a regular stop for steamers buying and trading goods. The replica was built in 1987.

Animals on the homestead are loaned for the summer.

I am glad we decided to stop and learn of the history of the homestead.

When we got back to Prince George, we stopped at Canadian Tire for a turn signal bulb for the headlight and 4 new wheel covers. We kept hearing a rattle and as it turns out when we had Jiffy Lube rotate the tires in Oak Harbor, they used an air gun instead of a wrench and stripped the wheel cover nuts. Always something.

We leave here on Wednesday for Valemount BC.