Our drive today via Hwy 16 East was beautiful, even saw some wild animals. Once again missed a bear cub photo..think this was #5 but did get a magnificent Elk and Mountain goats.


Our first stop was at the Terry Fox Rest Area to read plaque and view mountain named in his memory and honor. Terry Fox who lost his leg to bone cancer, was a Canadian athlete, humanitarian and cancer research activist. In 1980 with one leg he undertook the run across Canada for cancer research. Due to illness onset during the race, he managed to complete 5,375KM and in 1981 at the age of 23 passed away. When driving to Jasper via Hwy 16 from the west, take a moment to stop and read the plaque and view the mountain and park. en.wikipedia.org/wiki/Terry_Fox


Our next stop was at the Mount Robson Provincial Park Visitor Center with awesome views of Mount Robson. It is the highest mountain in the Canadian Mountains at a height of 12,972ft. Can just imagine what it would look like covered in snow. 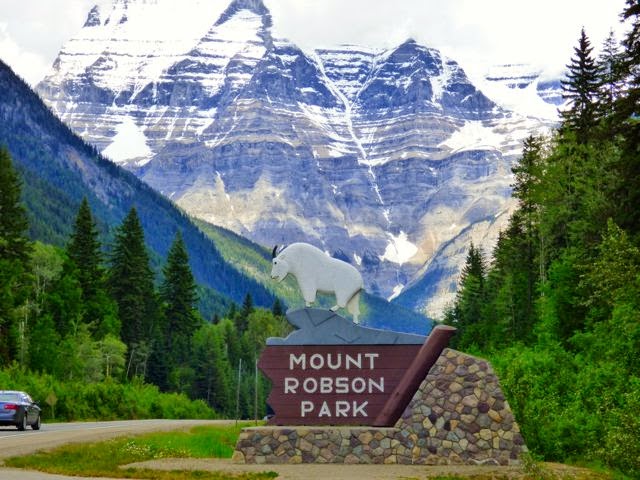 Continuing on passing Moose Lake and entering Alberta, we stopped at the Henry House Marker outside of Jasper on Hwy 16.the location of a North West Co. fur trading post on the Athabasca River from 1811-1830. No remains.


Next we drove another 10 or so miles east to the Jasper House Marker and 600m hike to a viewpoint showing location. Jasper House was also a trading post located at the north end of Brule Lake from 1813-1861. No remains.

We then drove to the Jasper Park Lodge for some photos. The Lodge is host to many tour groups and families. The setting is between two lakes and features lodge and cabin accommodations. A re-known golf course,hiking, biking and horseback riding.


We drove into Jasper to get a bite to eat only to find that the town had completely lost power and no food was being served.

Got back to campground around 8PM and were exhausted. What a beautiful area. We were here in May one year and the mountains were still covered in snow. Think this winter was not so snowy.

Anyway the Canadian Rockies are a different must see. Far more spectacular than our Colorado Rockies.