A good weather day so we decided to take the 8:30 Ferry from Anacortes to Friday Harbor on San Juan Island in order to visit the American and English Camps and to tour the Island. Several years ago we toured Orcas Island. The San Juan Islands are located in the heart of the Salish Sea and were discovered and named by Captain Lopez de Haro in 1767. They are made up of 172 islands,rocks and reefs. During low tide, that number jumps to 743. The islands offer rolling hills to forest growth to beaches. They afford every opportunity for the outdoor activities one wishes to experience. The most visited and ferry accessible are Orcas,San Juan,Lopez and Shaw. Several of the other larger islands are only accessible by private plane or boat. Included in these would be Decatur and Blakeley.


The ferry ride from Anacortes to Friday Harbor takes an hour and with car the cost is $60/rt for seniors. The Washington State Ferry system provides service to Sidney, BC, the Olympic Peninsula and other Islands in Washington. The Ferry is very comfortable and there is food service on board. My only suggestion is that they offer a commentary about the islands you are passing.
www.wsdot.wa.gov/ferries

Orcas is the largest Island covering 57 square miles and San Juan Island is 55 square miles. Orcas is known as the "Emerald Isle" due to its curving roads, beautiful shoreline and charming hamlets. Moran State Park takes you up to Mt Constitution which gives you an awe inspiring view of the islands and Mt Baker. We hope to return while we are here. San Juan Island features a 19 acre sculpture park, lavender farms,ciderworks and distillery and quaint Roche Harbor where the Hotel Haro built in 1886, closed in 1945 and restored and reopened in 1960 is located. Among the famous who have stayed here include Theodore Roosevelt, Taft and John Wayne. Roche Harbor is very quaint and is a resort area. A nice place to stay on the northwest part of the island. Shaw Island is small less than 10 square miles. A great place for bicycling or exploring. There is a 1924 general store at the landing, historical museum, red schoolhouse and sandy beach. Lopez Island is known as "The Friendly Island" where people wave. It is 29 square miles with easy cycling terrain,museum,wine tasting room and restaurants. Someday we hope to visit all these islands. For more info go to VisitSanJuans.com

Upon landing in Friday Harbor, we drove to the American Camp site on the southeast part of the Island. The camp was established in 1859 when Lyman Cutlar, an American, shot a Hudson Bay Company pig rooting his garden. This came to be known as "The Pig War". When British authorities threatened his arrest and eviction of Americans from the Island, Capt George Pickett was sent from Fort Bellingham for protection. In response, the British Government sent 3 warships and 400 Royal Marines who established the English Camp on the northwest part of the island at Garrison Bay. When word reached Washington, Lt Gen.Winfield Scott was dispatched to contain the affair. Within a week it was agreed by both side to reduce forces to 100 soldiers and a single British warship. For the next 12 years, the island remain a peaceful joint operation. In 1871 the boundary question was submitted to Kaiser Wilhelm I who ruled in 1872 the islands belonged to the United States. Royal Marines left in 1872 and US troops in 1874. This is only war that the only casualty was a pig. For a more complete history of the Island go to www.nps.gov/sajh

When we got to the American Camp near the Visitor Center saw an  eagle nest with a watchful eagle protecting the eaglets. Also some deer beside the road. 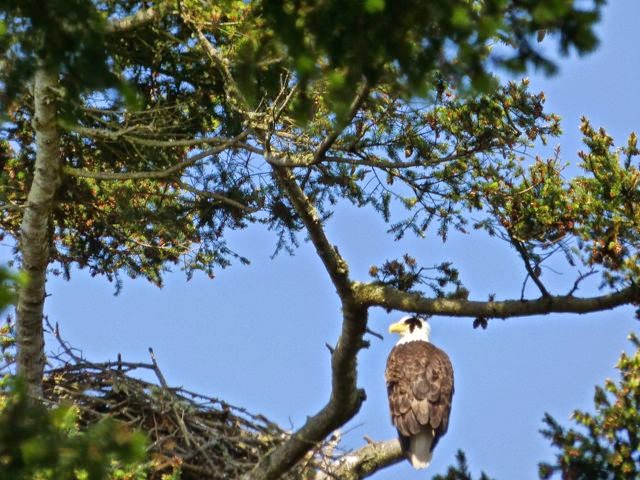 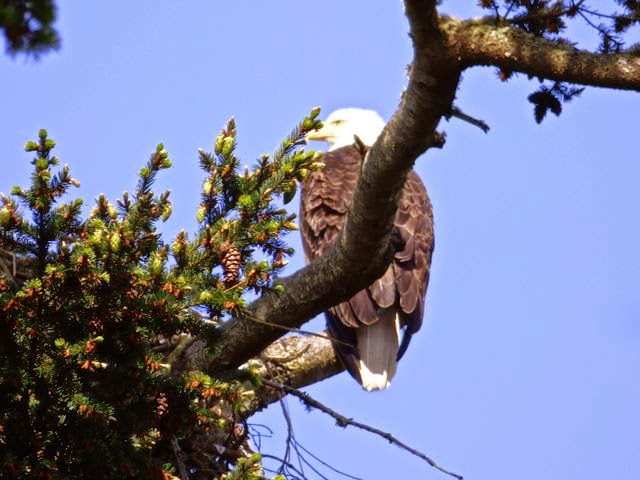 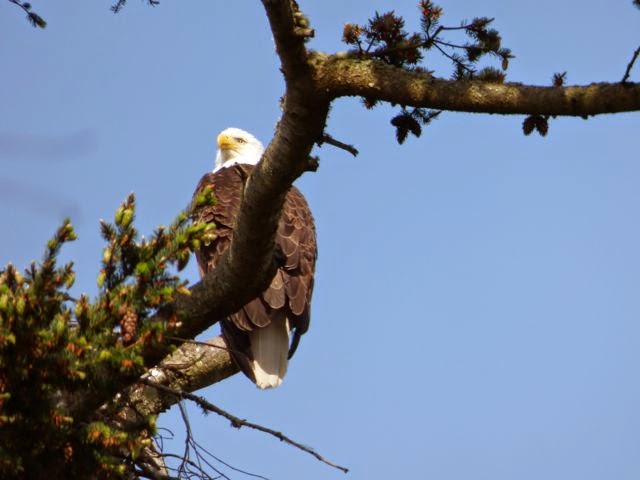 Our next stop was the English Camp driving on the West Side Road along the Haro Strait. Only a few of the buildings remain and a garden. A very beautiful setting. Had our picnic lunch.

Enroute back to Ferry for 2:00 PM departure, passed a farm that had one lone camel. Story tells that he was in a herd of Alpacas that came to the Island and owners have kept him. Seemed to be quite happy grazing and even posed for us.
Cathie and Al you would love it in this part of Washington. There are several nice campgrounds north of Oak Harbor on Hwy 20. You could take your bikes and car on the ferry to visit the islands. Think about it for your summer trip sometime or even the Fall and late Spring.