To break the routine and because it was such a beautiful day, we decided to drive down to Lake Havasu City, AZ to walk the London Bridge. On the way we stopped in Bullhead City to try and find the ruins for Fort Mohave, but unfortunately there is no signage or access. Lake Havasu City we had never visited and just wanted to see what the area was like.

Our drive took us through 3 states..NV,AZ and CA. Of course Laughlin and Bullhead City are separated by the Colorado River. Stopped in Bullhead City at Safeway to get our picnic lunch which we enjoyed at the local park on the river under a Eucalyptus.  It is said this is least expensive town in Arizona to buy a home. Seems to be a big area for snowbirders, but we weren't too impressed. Continuing on through Needles, CA we arrived at Lake Havasu City and the London Bridge.


The 1831 bridge that spanned the Thames was dismantled and relocated here in 1967 with the completion in 1971. It was purchased by Robert McCullough chairman of McCullough Oil Co and founder of Lake Havasu City as a tourist attraction and increasing interest in the area. The land was free with the promise of developing the area. The bridge arrived at the Port of Los Angeles in numbered pieces and transported overland. Believe that the total cost of purchase, transport and rebuilding was around $8M. 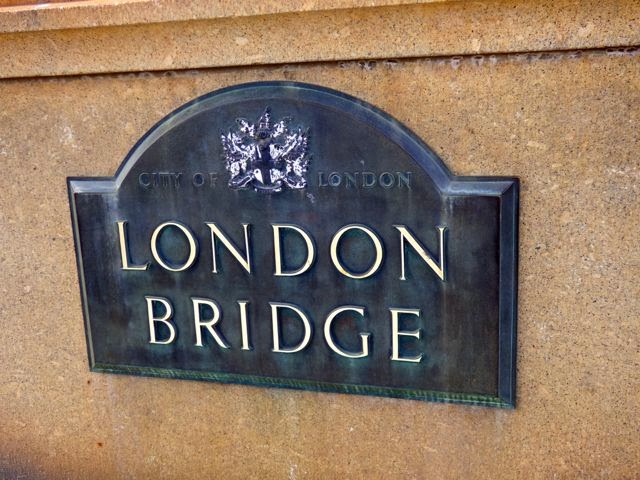 There is a song by Gary P Nunn in reference to the Bridge called London Homesick Blues. "Well, when you're down on your luck/and you ain't got a buck/in London you're a goner. Even London Bridge has fallen down/ and moved to Arizona/now I know Why."

Also there was made for TV movie "Bridge Across Time". In the movie a series of murders in Lake Havasu is attributed to the spirit of Jack The Ripper whose soul was transported in one of the stones of the bridge. And we all remember the childhood song "London Bridge is Falling Down".

After leaving Lake Havasu rather than return the same route, we decided to take IH 40 east to HWY 93 through Kingman as there was a signage John wanted to photograph for his website of Camp Beale Springs. This was a US Army Camp established in 1871 and abandoned in 1874. Prior to the establishment of the Army Camp, a wagon road was built and completed in 1860 using camels as pack animals. The road crossed the 35th parallel. Increased traffic on the road created tensions between the travelers and the Hualapai and the Hualapai War lasted from 1866 to 1870. The Hualapai were forced to leave in 1874 and sent to the Colorado River Indian Tribes reservation at La Paz near Parker AZ.

It was a long day, but enjoyable. Drove over the Tillman Bridge at Hoover Dam, but too dark for photos. We visited there last year.

This last week John went to walk in dentist with back molar that was bothering him. Well, the tooth was cracked and infected so he has to be on antibiotics for week before it can be pulled. That will happen Tuesday. We also had to view the room for the dinner with family get together on the 1st at the New York New York hotel. While there put $5 in a quarter slot and won $122. That has never happened before and the first time I have played a slot in over 5 years. John also installed the new kitchen faucet and finished replacing the screen wire in all the screens.

Pat just came over to invite us for another get together tomorrow. We enjoy these.
Posted by Amy at 2:09 PM