Relaxing and Catching Up

Since arriving at PT MUGU on 5 November, we have just relaxed and enjoyed the beach, sunsets and sunrises. John has gotten caught up on his website and I have completed 25 DVD's consisting of our travels involving some 6.560 photos and over 100 songs. The most difficult part is matching songs to photos. It has truly been a labor of love and something I hope to enjoy in my old age or I should say older age. 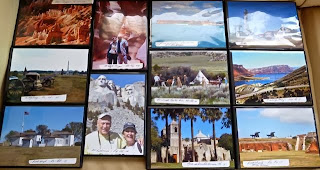 The sunrises and sunsets are beautiful and walks on the beach very relaxing. Have not seen any dolphins or whales this year, but  lots of Harbor Seals.


There is a memorial to Alaska flight that crashed off the coast 31 January 2000 enroute from Puerto Vallarta to Seattle.
The memorial on base is located at the end of the  point. There is also another memorial in Port Hueneme in the form of a sundial.
There were no survivors and many never recovered.


We have experienced several very windy days and nights which resulted in close quarters as we brought the slides in to avert any damage to awning covers. We replaced the large slideout awning cover several years ago due to windy conditions on the road and the large one on passenger side due to wear when we were at Fleetwood last summer. Just like a home, constant upkeep.

Before starting out this time,John bought a small Duraflame heater at the "Big R". I refused to have a space heater for safety reasons and this one has really worked out well and is very quiet. During cold nights we leave it on and it adjusts to comfortable temperatures. It is also on rollers.

Yesterday could not look at the dirty windows and iHome so got out my micro fiber rags and mixture of Dawn solution and went to work cleaning the outside. So many campgrounds do not allow washing of vehicles and this works great. Now to clean inside before we depart Tuesday for Camp Pendleton at Del Mar RV Park. Looking forward to this and being on the beach again.

After departing Del Mar on the 13th January, we will spend 2 nights at March AFB enroute to Nellis AFB in Las Vegas until the 15th of March.