Today we took the Ferry from Levis to Quebec City which is $12 rt and takes only 10 minutes. The ferry runs every 30minutes and is a very convenient way to get into the city. The weather was extremely hot and after taking the Funicular to the top of the upper city, we walked to the Citadel. I bought 2 bottles of water along the way and stopped to rest several times due to the heat.

Since the Citadel is an active station, you must take the tour which is around 1 1/2 hrs. The tour gives you free admission to the changing of the guard the next day unless you get there early enough for the event which is at 10AM everyday until 2 September. We got there in the afternoon so will return tomorrow for this event.

The Citadel is part of the fortifications built in Quebec. The existing star shaped fortification was built by the British in 1820-1831 to secure Cap Diamont from the Americans and to serve as a refuge in case of attack. 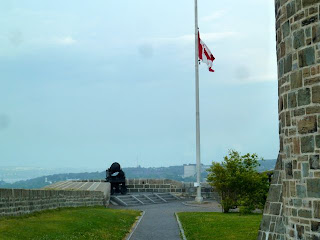 The Quebec Conference in 1943-44 took place here and was attended by Roosevelt and Churchill.

Since 1920 the Citadel has served as the home station of the Royal 22nd Regiment and is also the official home of the Queen of Right of Canada and the Governor General who reside several weeks a year.

We then took the Funicular down to the Lower City and near the Ferry to have dinner at Cote a Cote. A thunderstorm was coming in and as we boarded the ferry, the rains came. Walking  to our car, we got drenched.
A warm shower and then to bed completed our day.