This afternoon we attended the performance of the Tattoo in Halifax.
This is the largest indoor show in the world and performed every year the first week of July. The performance is very fast moving with each act only lasting 3-6 minutes. It is held in the Metro Center across from the Citadel and featured a cast consisting of military and civilians  from Canada, Germany, USA,Australia and New Zealand numbering almost a thousand. The mission is to stimulate Canadian patriotism, educate youth and recognize Canadian military forces and the RCMP. 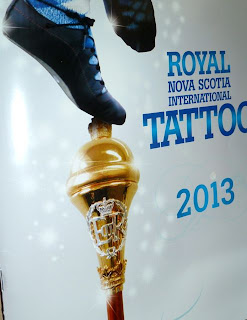 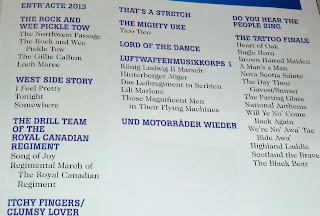 Each year the theme is different. The meaning of Tattoo is a signal on a drum, bugle or trumpet at night for military to go to quarters. Also a military display or pageant.The first Tattoo was performed here in 1979.

This year two military events were recognized:
The bloodiest battle of 1813 when the victorius HMS Shannon defeated the USS Chesapeake.
The Battle of the Atlantic from 1939 to 1945 was the longest and hardest battle ever fought at sea.

The Tattoo Children's choir gave a very moving performance of "Hallelujah" in recognition of lives lost at Sandy Hook Elementary. As they sang pictures of victims were displayed on the screen. Could not control my tears as was the case with several others in the audience.

The DVD of this year's performance will be available for sale in October which I intend to buy. Since photography was not allowed, the pictures I am posted were taken from the program. Even they are not very good. 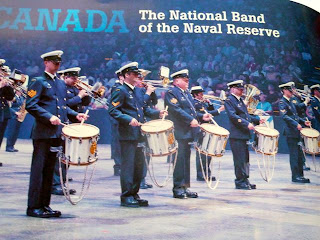 If ever in this area, please make it a point to attend. Well worth the cost and time.

After the performance we decided to return to a restaurant we had lunch at last week "Waterfront Warehouse". John had scallops and I had a delicious lobster crepe. A bit pricey, but worth it. The sun came out briefly, before more rain.