I met a real nice lady at the campground in Moncton who camps in a tent. She lives locally, but likes to camp here every summer. She is originally from Toronto. Think she must be in her 80's. Sorry I did not get her picture, only the tent. 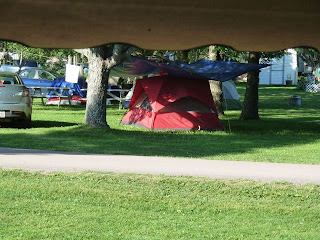 We arrived in at the Riverview RV Park in Edmundston NB on the 13th as a stopping point before going to Quebec City. Full hookups $32.00/nt. We are in site 47 and have satellite. Wi-Fi is good and free. They only take cash in Canadian funds. After going to RBC for the cash, strange thing happened..got a call listing phone number as 0000000000. Knew I should not answer, but did and voice said our debit card had been blocked. So we called our bank and no such thing. Googled the 000's and it is a scam.So don't answer any calls with 000's. Really un-nerves you especially since we had just done an ATM withdrawal. I also refuse to answer calls from unknown which happened later same day. Edmundston is on the St John River that separates New Brunswick from Maine.


We then drove into town to visit the reconstructed Petit Sault Blockhouse built in 1841 during height of the boundary dispute between the US and England. 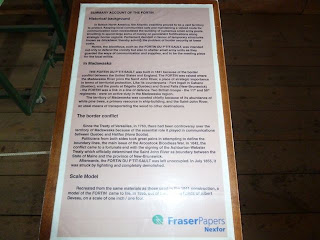 We then stopped in the Visitor Center where they had a display of a wooden sculpture by Paul Gregoire in memory of his great grandfather who was murdered, his body placed on the railroad track and cut in half.


14th we decided to drive down to Grand Falls to visit the gorge and falls which is the largest waterfall in New Brunswick. 230ft high and 1 mile long. Well not today..barely a trickle. Guess spring is best time to get full effect. You can also do a zip line across which would be more awesome when the falls is at its peak.

We then drove to Fort Kent, ME on the Maine side crossing over at Fort Fairfield. Fort Kent was built in 1839 and stood in the middle of a fierce 56 year old controversy over the location of the Maine-New Brunswick border. Ten months before it was built, the armed conflict known as the Aroostook War took place. Officials in Fredricton and Augusta finally agreed to a truce. The location for the blockhouse on the confluence of the Fish and St John rivers was chosen to keep peace and manned by a non military group. In 1842 the Webster Ashburton Treaty established the St John River as the international border.


Before returning to Edmundston we stopped for gas at the Maine side since it is $3.77/gal versus $5.00 in Canada. I also got 2 bottles of wine.
Well the wine resulted in a car search, but no duty. I was admonished for carrying a pill box with aspirin, tums and meclizine. Was told to always carry in marked bottle.

Today we drove the 60km to Cabano QC to visit Fort Ingall. On the way we stopped at the Quebec infotouriste who proved to be very helpful with info on our continuing journey to Quebec City and Montreal. Andre, I love his French accent, provided us maps and much info. Thank you, Andre. 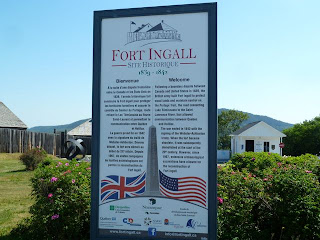 Fort Ingall sits on the Temiscouata Lac and was built by the British in 1839 due to a boundary dispute with the US in order to protect the wood lands and to control the Portage Trail. The war ended in 1842 with the signing of the Webster-Ashburton treaty and the fort remained in Canadian control.

Stopped for a picnic lunch on Temiscouata Lac.

We stopped at a roadside stand and purchased some delicious strawberries. The best we have eaten..even better than Oregon.

Tomorrow we leave for Quebec City.

Our time in Atlantic Canada has been very nice and we hope to return again one day. Our downfall has been the visits to the Tim Horton's for donuts and coffee.
Posted by Amy at 2:05 PM