Fort Lennox is located on the Ile aux Noix, an island in the middle of the River Richelieu in the town of Saint Paul and reached by ferry from the Park visitor center. The fort features restored defense works and stonework buildings surrounded by a star shaped moat.

It was built by the British between 1819 and 1829 to protect the colony from possible American invasion. There was an earlier fort built on the site by the French during the Seven Years War. In 1775 the Americans occupied the island. When they retreated, the British built the present fort.


Over the years the fort has served as a prison, reform school and refugee camp. It is one of few forts in North America to have survived intact.

They also have a very nice museum.


For more info go to John's site:
fortwiki.com under Quebec

We arrived at Camping Amerique Montreal yesterday. We chose this campground for price and location. With electric 30amp and water, the price with Good Sam Discount is $207 for 9 nights. This seems to be a campground for seasonal summer campers. Internet is great for a small charge. Michel is most helpful and friendly and there is a food kiosk by the office. Would definitely stay again if in the area. Our site is 701 and we have a cornfield behind. Costco and IGA just down Hwy 15.


There are 4 fort locations near the campground and I will only write about 2 of them even thought we visited 4 sites. This posting will be about Fort Chambly in the town of Chambly on River Richelieu. The town of Chambly is most scenic and could spend a day just walking the quaint streets.


Fort Chambly was one of five forts built along the River Richelieu to protect settlers from the Iroquois by the French. They had nearly 100 years of prescence until 1760 when they surrendered to the British.

The original fort constructed in 1665 was wood and known as Fort St Louis. At the turn of the 18th century under threat of British invasion, construction began on a stone fort in 1709. In 1775 and 1776 during the American Revolution rebel forces invaded Canada and occupied Chambly for several months. During their retreat they set fire to the fort In 1776 the British began the rebuild.

In 1812 the British build a large military complex near the fort;however, only the fortress and blockhouse remain.

The fort today has undergone major renovation and archaeology explorations. On the grounds is a beautiful park.

The museum gives a very thorough history with displays. 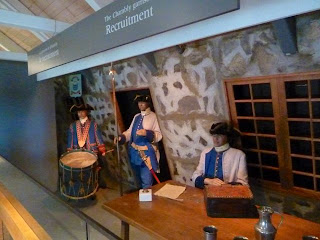 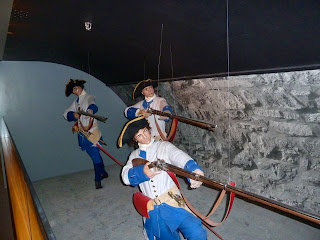 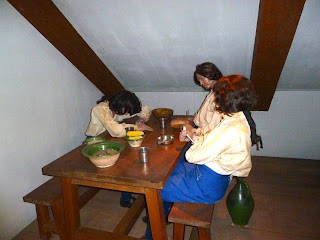 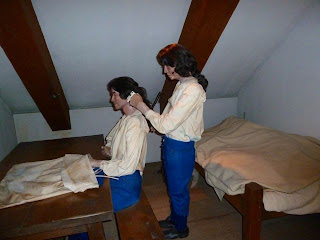 Interesting fact about the latrines:
The canal at the bottom allowed waste to be evacuated outside the fort.


Another fact involves the children:
The Indians brought back the prisoners from the Iroquois war, especially children to be adopted or sold back to the Canadians.

300 years later,the fort still stands in spite of numerous conflicts.
I recommend a tour of the fort if in the Montreal area.

This is our last day in Quebec City area so we decided one more ferry ride to the city and a walk around upper and lower areas. We also wanted to attend the "Beating of the Retreat" ceremony at the Citadel.

Some things I failed to mention in previous blogs:

Quebec means where the river narrows.

Why do they speak French in Quebec province?

Well, the story I got and not sure if it is true is that it all started with the American Revolution. England decided that in order to keep the French Canadians loyal to the crown and not side with the Americans,they would let them keep their language and their Catholic Religion.

A note on our Campground: Very  convenient for taking the ferry..only 6km. Best way to get to Quebec City. $12/rt for senior and $8 parking.
Only downside is intermittent Wi-Fi, but we managed. Could always go to Tim Horton's. It is small, affords a nice view of St Lawrence and Ile d'Orleans. Pleasant staff and owner. www.campingdelamartiniere.com

Due to some catching up, we have stayed near campground most of week.
John has much to do with his website fortwiki.com and I continue to put our travel photos on DVD's. Most difficult part is selecting music to coincide with  photos. We have also decided to have some work done at Fleetwood in Decatur IN so altered our remaining stays in Canada by several days. We need to have the large power awning fabric replaced, household batteries may be replaced and front A/C fan replaced. Would rather have them do the work instead of an RV repair place.

Now back to our last day in the city. One of the items on list was to walk the ramparts, but due to Celine appearing in the venue on the Plains of Abraham and next to the Citadel, part of the ramparts were blocked.
We did not know she was appearing until today and the same when McCartney was here last week..too late to get tickets. Next big performance in by Rolling Stones.

After getting pass to see the "Beating of Retreat" which starts at 6PM on saturdays til September, we walked over to the Parliament and fountain.
I was ready to jump in and cool off. We then inquired about a buggy ride around the upper city, but at $90 for 45 minutes,decided to walk and find a cafe for early dinner. As it turned out, we decided to return to 1640 where we had lunch last visit. John got a delicious Thai chicken salad and i enjoyed a Bolognese pasta with 1 huge meatball.

Took his picture in front of Hotel Frontenac. He and his family visited here when he was in his teens and they stayed in the Presidential Suite. They were on a driving trip from Virginia to Quebec and Gaspe. His dad was with Thomas Cook and in those days he got many comps in travel.

I am going to try and post a video of the Retreat. The Retreat consists of the marching band, changing of sentries,trooping the Regimental Colors, firing of evening guns and lowering of the flag. 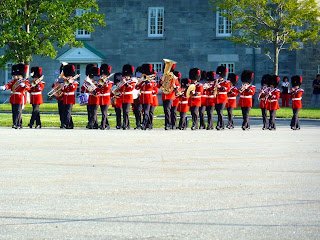 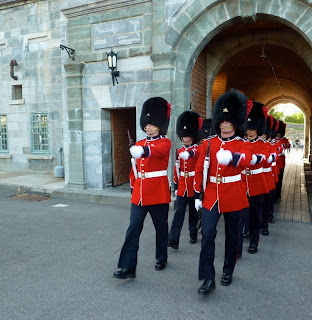 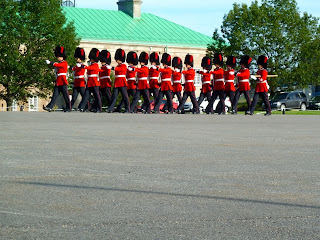 A walk back to the ferry via stairway instead of funicular, a stop for gelato and finally back at campsite around 8PM.


Tomorrow we have an easy drive to Montreal via Hwy 20 where we will be until the 6 August. We will be staying at Camping Amerique Montreal.