The town of Mahone Bay has been named one of Canada's best small town downtowns and pretty as a picture. It features many art and music festivals during the year as well as many small inns and restaurants. This area along with Peggy's Cove and Lunenburg are part of the Bluenose Coast area stretching 200 miles along Nova Scotia's South Shore.


Mahone Bay has some 365 islands and is a prime boating and sailing area noted for its  pristine waters. The welcome sign says"We love the beauty around us and welcome you to share it". Many German speaking immigrants settled her in 1754 due to British colonizing efforts of European settlers. Prior to this it was inhabited by the Mi'kmaq natives. It became an area steeped in agriculture,forestry,ship building,shipping and fishing. townofmahonebay.ca

We stopped for ice cream at "Dad's Ice Cream", Mom's Buy & Sell" before going to Lunenburg. 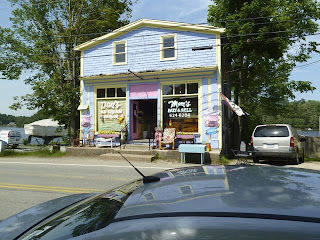 The town of Lunenburg was established in 1753, 4 years after Halifax during Father LeLoutre's War. It was one of the first British attempts to settle Protestants in Nova Scotia and as a result,the Catholics raided the community nine times in the early settlement. The town was designated a UNESCO site in 1995 as we have noted are many towns in Canada. 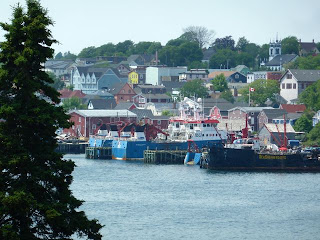 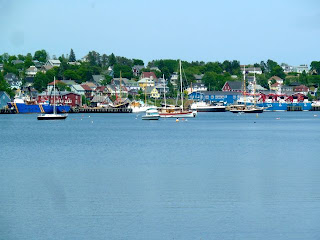 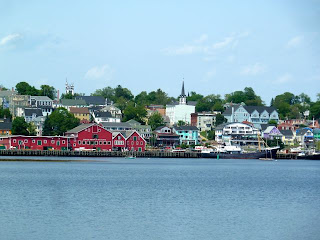 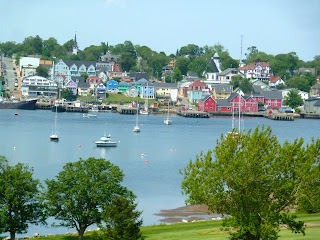 The Bluenose II is located here, which was in dry dock and one of the reason we decided to visit. This was a a disappointment. Also here is the Fisheries Museum of the Atlantic.

Don, you would like the golfcourse. Seems very challenging with the hills, but the view is fabulous.


There is much to see in the area. Unfortunately it would require a stay of around a week. Check out the website lunenburgregion.ca

Tomorrow and rest of week rain is predicted. Still much to do in the area.

We had a long drive today visiting Peggy's Cove, Mahone Bay and Lunenburg. Since I took a lot of photos, will write about Peggy's Cove in one entry and the other two in another entry. peggyscoveregion.com

This is a drive well worth the day from Halifax via Hwy 333 turning north from Peggy's Cove to Hwy 103 west and then exit 10 through Mahone Bay and Lunenburg.

Peggy's Cove sits on St Margaret's Bay and Atlantic. A very quaint fishing village with local artisans and the infamous Peggy's Point Lighthouse. It is supposed to be the most photographed lighthouse in Canada.

If heading north, be sure and stop at the Swiss Air 111 memorial. A beautiful granite memorial to the victims overlooking the bay and Atlantic. 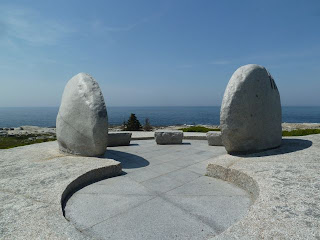 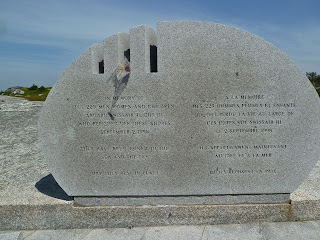 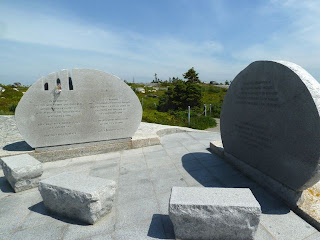 To recap the tragedy, on September 2. 1998 Swiss Air flight 111 departed JFK at 10:18PM enroute to Geneva. This was also known as the UN shuttle and often carried UN officials and scientists. The plane crashed in the Atlantic SW of Halifax at the entrance to Margaret's Bay between the communites of Peggy's Cove and Bayswater. All 229 people were killed. After 4 years it was concluded that it was caused by flammable material used in the structure. Many of the passengers on board would have flown Air Canada, but the airline was on strike.

If you have time enroute to Lunenburg, which we didn't, take exit 6 off 103 and drive the Aspotogan Peninsula to Bayswater. This goes down the east coast of St Margaret's Bay and up the west coast of Mahone Bay.

We just have not allowed enough time in Nova Scotia for all we want to see. Could spend several weeks each in different areas such as Southern Coast,Eastern Coast, Bay of Fundy and Northcumberland Shore before going to Cape Breton and PEI. Another trip, another time.

"Some people, no matter how old they get, never lose their beauty-they merely move it from their faces into their hearts." Martin Buxbaum

Happy Birthday, my love. You have graced me with your beauty, spirit, kindness and love. Thank you.

As we celebrate your birthday in Halifax, we continue to enjoy our journey together and may we celebrate many more. You have truly blessed my life and that of our families.

Today we drove over to York Redoubt located on Purcell Cove.

The Redoubt was built in 1793 at the outbreak of war between Britain and France on a bluff overlooking the Halifax Harbor and a key element in the defense of Halifax.


During WW I it served as housing for soldiers being deployed overseas.


During the 19th century the York Redoubt and the Citadel used signal flags to keep each other informed of ship's movements in the harbor. Today it is operated by Canadian Parks service. Even though it had not opened for the season, you could still walk around. It officially opens on the 26th.

During WWII a fire command post was built which served as the nerve center including an anti submarine net which stretched across to McNabs Island.

The Citadel was completed in 1856 and the 4th in a series on this site.
It never saw battle and was built to protect against the Americans and French. WW I and II housed soldiers and a command center for Harbor Defenses.

We purchased an annual Provincial Parks Pass for around $60/ea for seniors. A huge savings considering all the parks we will visit during our touring of Canada. Plus the convenience.

We spent several hours touring and saw the firing of the cannon, which they do everyday at noon. Housed in the barracks is a very informative museum tracing the Canadian military history over the years. 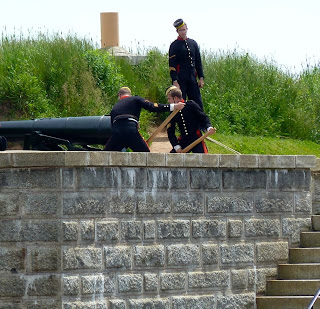 I won't go into the history as it is long and complicated, so suggest you go to wikipedia. John will also do a posting on his website fortwiki.com

Instead,will put up lots of photos.

After visiting the Citadel we went to Point Pleasant Park across the bay from Purcell Cove. This is a very popular park for hikers, bicyclists, dogs and visiting the batteries. Got our exercise for the day. They even provide feeding cages for the squirrels.