Shirley Plantation in Charles City County, VA is the oldest plantation in Virginia. Eleven generations of the Hill Carter family have owned, worked, operated and continue to inhabit the plantation over the past 300 years. The plantation itself was founded in 1613 and the home in 1738. It has survived Indian uprisings,Bacon's Rebellion, the American Revolution, Civil War and Great Depression.

The guided tour takes in only the first floor as the present family members live on the 2nd and 3rd floors.  It features original furnishings, portraits, silver, hand carved woodwork and the "flying staircase".

It continues to be a working plantation,family home and growing business. It is privately owned and no assistance is received from any government agency.

The business dates to Edward Hill I in 1638. Construction of the mansion began in1723 when Elizabeth Hill, great granddaughter of of the first Hill married John Carter eldest son of Robert Hill.

It was here that Ann Hill Carter was born and in 1793 she married Henry "Light Horse Harry" Lee in the mansion. They are the parents of Robert E Lee.

The women of Shirley showed compassion for the wounded and dying Union soldiers during the Civil War when after the battle at Malvern, they looked out and saw many of the wounded on the front lawn. It was because of this compassion that McClelland ordered the plantation saved from plunder and destruction. Two women of the 9th generation guided the property through both World Wars and the Great Depression.

It is located on the James River. The property features a 300 year old willow oak. The main crops today are corn, cotton and wheat. 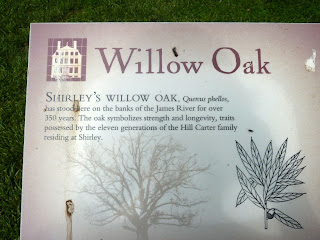 The family history is very complicated in that encompasses 11 generations. Our guide, Edie, gave a very interesting history of the family.

Nesting on the front porch were some barn swallows. Their nest is very interesting and appears to look like a woven nest made with mud and sticks. Thought at first glance it was man made.


Tomorrow we leave for Yorktown NWS in Williamsburg for 5 nights.
Posted by Amy at 2:24 PM