"Everything originates from the seed of Determination" 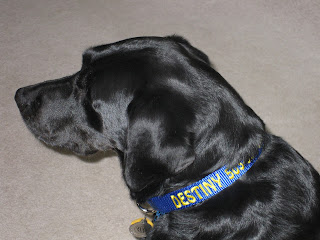 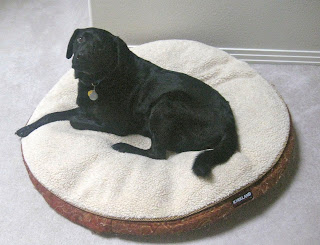 Today was a very sad day for us. We agonized over that heartfelt decision about Destiny. She has lost her quality of life in mobility and health. For the past 6 days she has suffered from constant diarrhea, no appetite and clearly in pain. When we arrived at the Flannery Animal Hospital, we were in tears knowing that we had made the decision. After conferring with the Vet we asked that we could spend some time with her and remain until the end. Even as I write this, I am in tears. Destiny was truly a blessing in our lives for the past 12 years. So full of spirit, love, patience and quick to learn. We gave her our final hugs, kisses and words of love then said goodby as she entered into a peaceful heaven.
We requested that she be cremated as with our other 3 dogs and ashes sent to us for later scattering. 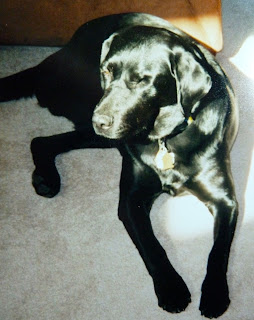 Many of you know how Destiny came into our lives, but will recap as it is a special story.

It was on 25 May 2001that I saw her story on NWCN, a station in Seattle. The story showed her playing at PAWS (Progressive Animal Welfare Society) in Lynnwood WA. She had been hit by a train and was found in a railroad tunnel in Everett WA after someone had left her and her litter mate there.
She was rescued by animal control officers who said she had been on the tracks for several days staring forlornly at her dead litter mate.

Veterinarians at PAWS fought to save her life as she was suffering from trauma, damage to her head,
skull, eye,back and one of her legs was crushed. Still she survived. Her right rear leg had to be amputated. They named her Destiny as they felt she was destined to live a happy life and wonderful life.

I knew she belonged in our home with our Golden Retriever Sam.We had just lost our Black Lab Rupert. So after several phone calls to PAWS, Sam and I drove to Lynnwood and adopted Destiny.
In order to adopt her, it had to be proven that she and Sam were compatible. So on 30 May 2001, Destiny was welcomed into our home.

She also had bowel incontinence, but after diet and acupuncture that was healed.

Destiny has been the most gentle of dogs, qualified for nursing and assisted livings visits, enjoyed quality time in the mornings in bed with us while we had our coffee, played with the grandkids, eager for petting and attention. She was a good traveler as we started traveling in our motorhome in 2009.
She has left her mark in 44 states and on may historic fort sites. Enjoyed walks in the park.


You are so missed and we loved you.


Thank you to all you sent messages of consolation.

You have now crossed over to the Rainbow Bridge making friends with other animals, frolicking and at peace. 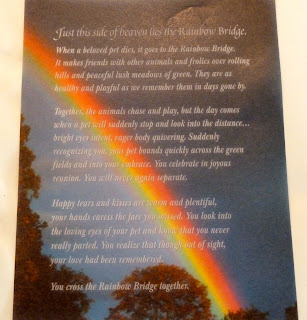