After taking Destiny to be boarded, we headed down the Baltimore/Washington Thruway to Fort Myer adjacent to Arlington National Cemetery.


Fort Myer by Army standards is a small base that has no ranges or field training. It is home to the 3rd Infantry Regiment, the oldest in the US Army. It is now a joint base with the marines Henderson Hall.
The history of Fort Myer can be traced to the Civil War when it was called Fort Whipple named in honor of General Amiel Whipple. The name was later changed to Fort Myer after General Albert Myer in 1881. Since the 1940's is it home to the US Army's elite ceremonial units including the US Army Band and the Old Guard.

Several flights by Orville Wright took place here in 1908 and 1909 making it the sight of the first flight on a military installation as well the location of the first aviation fatality when LT Thomas Selfridge was killed on a demonstration flight with Orville.

Buried on the grounds is "Black Jack", the riderless horse in the state funerals of MacArthur, Kennedy,Hoover and Johnson.  He was came to Ft Myer from Fort Reno OK in 1952. He was the last of the quartermaster issued horses branded with the Armies US brand on the left shoulder. He was in service 24 years until 1976. A large percentage of military burials in Arlington originate from the Old Post Chapel. In fact when we were there a funeral procession with the Old Guard was taking place.


We were also able to visit the stables where the horses who carry the caisson are stabled. There are some 53 horses and up to 8 funerals a day are taking place. The stables are spotless. A new man on the team must undergo rigorous training. He must care for the horses,learn to ride at the erect posture of a solemn military position.  Six of the horses pull a flag draped coffin on a black caisson carrying a fallen comrade to the final resting place in Arlington. The horses are matched grey or black and paired into three teams. The riderless horse is led behind the Caisson

The Old Guard Museum was closed due to relocation. This would have been very interesting to visit. 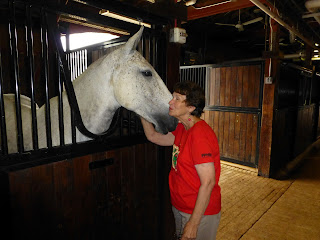