The Mission was founded in 1776 and is the 7th of the 21 missions in California. Father Serra's Chapel is the oldest building still in use in California. In 1812 a massive earthquake all but leveled the "Great Stone Church". Secularization in 1833 caused the mission to fall in disrepair. 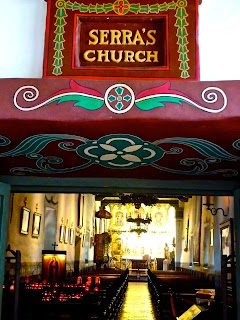 This area is noted for the return of the swallows on 19 March which is St Joseph's Day.

The mission today features museums housing many artifacts and showing living period of the day. In 1930 an excavation revealed the tallow vats where the Indians made candles, soap and grease from animal fats. The central courtyard or Plaza was the heart of the mission life.

Up to 2,000 Catholics and Native Americans are buried in the cemetery.


For a more extensive history go to wikipedia.

Decided on the way back to stop in CVS and get a flu shot.Have really debated about this, but thought it was best with our traveling.