After putting Destiny in Daycare at Petsmart we drove down to San Diego for the purpose of visiting the San Diego Presidio, Mission and Point Loma with a stop at Mission San Luis Rey in Oceanside on the return.

John also wanted to visit the battery sites of Fort Rosecrans located on Point Loma near the Naval Base and Cabrillo National Monument NP.

A beautiful day for touring, but a long drive. Fortunately we are able to use the carpool lane to avoid much of the traffic.

Presidio Real San Diego is located on Presidio Hill near old town and is now a museum. Much to our disappointment it was closed so we were only able to get outside pictures. It was established in 1769 and the first permanent European settlement on the West Coast. It remained the seat of California military power through the Mexican period. Father Serra dedicated the 1st mission here in 1769. It was later moved in 1774 6 miles up river named Mission Basilica San Diego de Alcala. 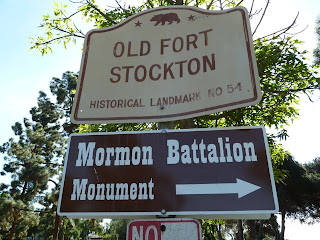 Mission San Diego became known as the Mother of the Missions. In 1775 after the adobe church was completed, the mission was attacked by Indians killing Padre Luis Jayme. Padre Serra returned to the gutted site in 1776 and began restoring the buildings. 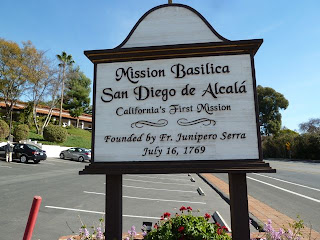 In 1821, when Mexico gained its independence, the mission was given over to Santiago Arguello. After the US Mexican War,the Cavalry used the mission as a military prescence until 1857. In 1862, the lands were restored to the Church by order of Lincoln. Today it serves as an active parish and cultural center. http://www.missionsandiego.com


We then drove to Cabrillo National Monument located on Point Loma named for Juan Rodriguez, the first European to set foot on the west coast. The park has several hiking trails, tide pools, coast guard station,coast defense exhibit from WW II and earlier. Also still visible are batteries and fire control stations. Be sure and visit the museum.
http://www.nps.gov/cabr

On our way back we stopped in Oceanside to visit Mission San Luis Rey.
Unfortunately,it was closed for the day.


Picking up Destiny we finally got back around 700P.