We spent a quiet Christmas enjoying the view of the Pacific and taking a nice walk along the beach with Destiny. We hope all of had a nice holiday and we wish you the very best for 2013. Hope sent me some photos of grandsons playing in the snow.

The day started with my laptop not responding so made a trip to the Apple store in Simi Valley. A serious problem that gave cause to ship it to Apple repair. Was told it may take a week..boo hoo. Since it is not under warranty,Apple charges $316.00 to make any repairs regardless of actual cost, Think this is a deal.

27 December
Day did not start very well. During the night when I got up, experienced extreme dizziness...room spinning..loss of balance. John had to help me to bathroom. Went back to bed and same thing at 6AM..Decided a trip to ER was necessary. Closest hospital is St John's in Oxnard. They immediately gave me a room. I carry most of my pertinent medical records with me which facilitates explanation of medical history. ER doctor diagnosed it as Vertigo, but wanted to order further tests. Since dizziness can also be associated with heart problems, he ordered an EKG. He then ordered a blood draw to check Troponin levels which were elevated so then they decided to admit me overnight in order to perform a CT scan of the heart as well as have me checked by a neurologist. The neurologist ordered an MRI. To make a long story shorter, all the tests proved everything OK and medication ordered for dizziness Meclizine,which I consider a miracle drug. It certainly helps. I was also put on Lipitor,not sure about this except maybe the scan showed some plaque.
I was very well treated and thank all the staff for their attention. Only downside was being in the ER for nine hours before admittance.

I am a believer in the power of prayer and while in the ER a couple who do mission work for their church asked if they could pray for me. Of course I agreed and she put her hand on me and prayed. The power is in the end result.

I have never had Vertigo and I have a theory about what may have brought this on, but can never prove it. After several visits with the chiropractor, I had my first of two minor dizzy spells..nothing as severe as Thursday. I just wonder if the type of treatment he did was a factor? Oh well, life goes on.

Got a call from Apple today that my laptop was in. They had to replace the Logic board, so the $316 was a good deal.It is like I have a new computer.
On the way home we did some errands in preparation for our departure on Monday.

Well my turn to take care of John. He woke up during the night vomiting and diarrhea. He thinks it is something he ate. Today he stayed in bed.
I cleaned the iHome,did laundry etc. He only has taste for ginger ale. Will try and get him to eat something tonight.

The Reagan Library located in Simi Valley is situated on a mountaintop overlooking the surrounding mountains, valleys and Pacific Ocean. The views are beautiful and breathtaking. He chose this site for his final resting place because of the views. The Library opened in 1991 and has welcomed more than 5,000,000 visitors. Reagan referred to the site as the "shining city on a hill". 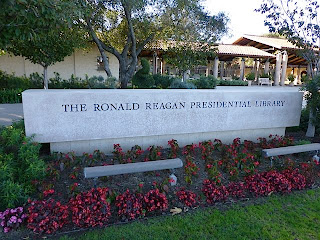 It is on a 100 acre site with more than 100,000 square feet in 24 different galleries including a full-sized replica of the oval office and Air Force One that served 7 presidents. Think if the present president had to fly on a 707, his trips would be few and far between.


The displays feature exhibits from his childhood to his final resting place,interactive displays as well as what it is like use the teleprompters.
I now understand this.


A special exhibit features 25 Christmas trees decorated to celebrate the defining moments of America's road to greatness from the Revolutionary Era to today (1770-2010). Sadly,they will be dismantled after the holidays. 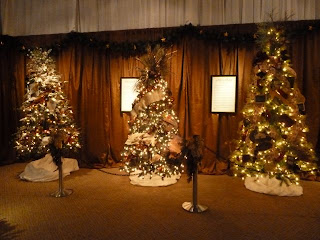 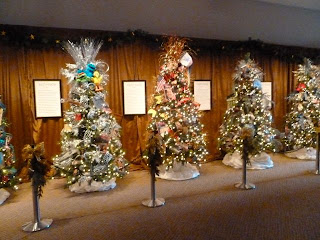 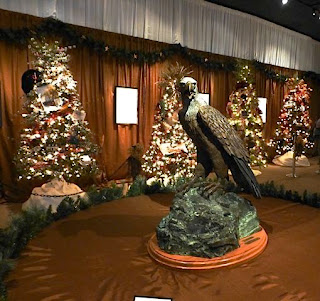 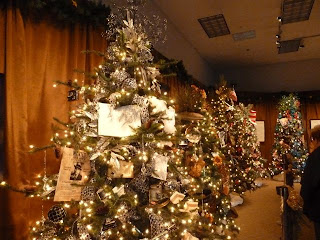 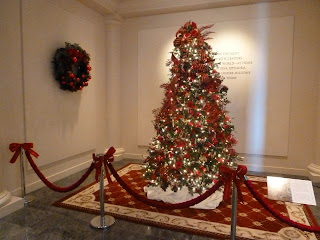 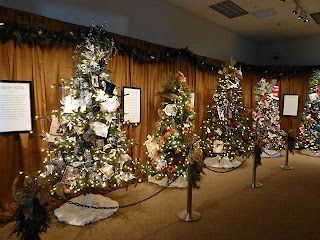 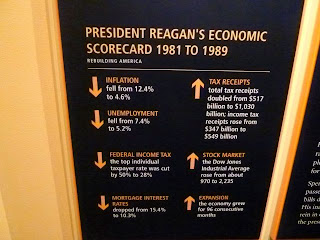 
We opted to  purchase a $65 membership for 2 that enables entrance to each of the 12 presidential libraries. Hopefully on our travels we will be able to visit each one. Not sure that any can top this one.If you are in the area,please visit. http:www.reaganlibrary.org

A 1 hour drive to the San Fernando Valley to visit Mission San Fernando established in 1797 by Father Lasuen and named for the king of Spain Ferdinand. It was near this site that gold was first discovered in California.

The mission at one time comprised almost 122,000 acres raising cattle and crops as the goal of the mission was to be self sufficient. In 1834 it was secularized and in 1861 returned to the Catholic Church.


A gift from the Hearst Foundation in 1940 enabled the restoration of the mission. In 1971 an earthquake destroyed the church and was rebuilt in 1974 and remains active for the community. Pope John Paul II visited the church in 1987.

Adjacent to the church and cemetery is the "Bob Hope Memorial Gardens" where he and his wife Delores are interred. Both were over 100 when they died. Hope in 2003 and Delores in 2010. The adjacent cemetery is the resting place for several thousand neophytes and early settlers attached to the mission.


The museum features many relics, artwork and depictions of life as it was in the mission. There is the Madonna room featuring several hundred statues, plaques and paintings in tribute to her.

After my chiropractor appointment with Dr. Knight in Port Hueneme, who I might say is doing wonders for my neck and head problems, we decided to drive up to Santa Barbara for visit to the Presidio.

The Presidio emcompasses much of the original site of 1782 and was the last Spanish fortress built in California. It sits between the Santa Ynez Mountains and the Pacific Ocean in the downtown area on Canon Perdido.

The soldiers quarters is the oldest building in Santa Barbara and the second oldest in California. Presidios protected the missions and settlers against foreign invasions and Indian attacks. They also provided a cultural and social center. The soldiers and their families were vital in the colonization of California and many of their descendents still reside in Santa Barbara.

Earthquakes In 1806 and 1812 caused extensive damages. The Presidio's military role ended in 1846 with the occupation of the USA. City streets were constructed through the Presidio site with most of the original structures lost to the forces of growth and nature.

The Presidio SP was created in 1966 and over the years archaeological excavations and research have revealed detail information on its history and construction.
Posted by Amy at 5:26 PM No comments: