Due to predicted rainstorms, we decided to depart Grants Pass a day early for Eureka,CA. Our time in Grants Pass was spent mostly in iHome due to rain, rain and more rain. This added to the fact that we were very disappointed in the election outcome and the thought of not seeing Hope and family for another year we were just in a funk.

Hope sent us a picture of the first snowfall in Redmond and glad we decided to leave early.

Drive to Eureka is scenic passing through Crescent City,CA with view of the Pacific and some of the Redwood Forests. Would definitely not want to drive 199 and 101 in rainy or snowy weather..very narrow and winding. We made several rest stops, gas, propane and stop at "Trees of Mystery" for fixing lunch. We had been here before some years ago so did not take the tour.

The KOA in Eureka is very nice with long sites, good fenced dog area and spotless laundry. Office store is well stocked and staff very friendly. A pizza place in historic district was recommended and we went there for dinner. Must say it was best pizza so far we have eaten on the road. Huge slices, thin crust and fresh toppings. "Paul's Live from New York Pizza" on Central Ave. I had the Godfather which consisted of Ricotta,Mozzarella, Tomatoes, Pesto, Garlic and Romano. John got the Pepperoni Special.

After settling into the campgound, we drove downtown to Fort Humboldt SP only to find the museum and visitor center closed due to budget cuts;however, we did walk around the grounds and only two buildings remain..hospital and surgeons quarters. The Wiyot occupied this area as a flourishing culture as hunters and gatherers until gold was discovered in 1849 and their way  of life ended. The fort was established to protect the white settlers who took over the Indians hunting fields, fishing sites and villages. The military acted as mediators and the land promised the tribes were never received and over 100 unarmed Indians were massacred and another 200 died. Grant was stationed here in 1854 and after 5 months, resigned his commissioned. He later as history notes rejoined the Army leading the Union troops and 1869 became president for two terms.


Fort Humboldt was abandoned in 1870 and became a state historic park in 1963.

On the way back to camp we stopped in historic area to photograph several of the Victorian Mansions. The Ingomar Club was once the home of lumber baron Carson built in 1885. The club is strictly a "man's club".
Eureka has over 1600 examples of Victorian homes. 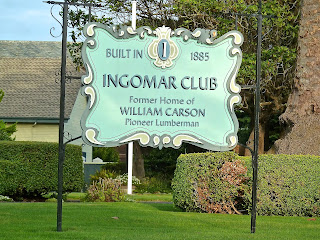 It is said that there are over 101 things to do in Humboldt county from exploring art to zip line adventures. it is also gateway to the Redwoods.