After departing Hill AFB in Ogden we spent 2 nights at Gowen NG Base in Boise before arriving back in Redmond at Hope and Shawn's. We stayed at Gowen on our first journey in 2009. A good bargain at $10/nt with full hookups, concrete pads and only 8 spaces.

Doesn't seem possible that we left a year ago this month. When you are enjoying life, time passes quickly. We visited over 100 historic forts and markers. Visited with good friends and family and have a lot of good memories.

It is good to be back and spend time with Hope,Shawn,Colt and Cade.
The grandsons are growing up too fast. Colt will be 9 in October and Cade is 6. Both grandsons are doing very good in school. Colt plays football and Cade soccer. They have a dog Casey, a cat Checkers, a black rabbit Blackie,6 hens, 2roosters,1 bantam and 2 horses. Never a dull moment around the home.

Their property overlooks the Three Sisters and Mt Jefferson. Sometimes when the weather is clear you can also see Mt Bachelor and Broken Top.
The recent forest fires have left the area smokey, but not near as bad as a week ago.


Our plan is to stay here until sometime in November, but weather dictates our actual departure. Hopefully the snows will come after we depart.

Our drive today took us west on IH80 to IH84. The rest stop on IH 80 at exit 170 is also a welcome center for Utah and sits below beautiful red mountains. On IH 84 toward Ogden, stop at the Devil's Slide Lookout. Quite unusual.

Due to several wildfires in the mountains, Wasatch Mountains are barely viewable from the campground. This is our 3rd stay at Hill. We will be here for 7days then head to Boise for 2 days before arriving in Redmond.
Have we really been on the road for a year? Sure have done and seen many interesting sights and had good visits with friends and family.


Hill AFB is home to the AF Material Command, F-16 Fighter Falcon,A-10 Thunderbolt II and Minuteman III IBM. We are being entertained daily with the training missions especially the F-16's. There is also a very good museum on base featuring many different types of military aircraft and historical information.
Posted by Amy at 4:29 PM No comments:

Fort Washakie is located on the Shoshone Wind River Reservation northeast of Rock Springs. The drive took us via Hwy 191 and 28 approximately 140 miles. We drove through the town of South Pass, once a gold mining boom town.

The fort was originally named Camp Brown, but later renamed in honor of Chief Washakie leader of the Shoshone. It was a military post until 1909 and is now the headquarters of the US Indian Service on the reservation. There are no markers and remaining buildings are used for Indian offices and homes.

While in the area we visited the Washakie Cemetery and the grave of Chief Washakie and the Sacajawea Cemetery that has the grave of Sacajawea.
It is here that the real story of Sacajawea gets complicated in that the gravestone and markers indicate that she died in 1884 and not 1812. There are several gravestones next to hers belonging to her adopted son Bazil(nephew) and Jean Baptiste Charbonneau as well as a granddaughter by Bazil.She also supposedly had a daughter Lizette who died at a very young age. 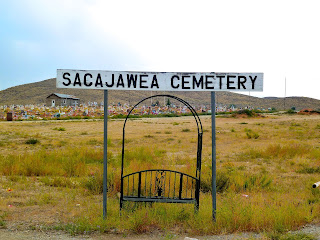 After the expedition she traveled to St Louis with Charbonneau and Baptiste where William Clark adopted Baptiste. At some point in her life she traveled back to the Shoshone reservation at Wind River where she died of old age. It is believed that Charbonneau had two wives and that it was not Sacajawea,but his other wife that died in 1812.

She proved to be a valuable interpreter and guide for the Lewis and Clark  expedition due to her extensive knowledge of the Shoshone land.

Chief Washakie was born in 1808 and died in 1900. He was a fierce warrior, a skilled negotiator, leader of the Shoshone and friend to the white man. With the signing of the Fort Bridger Treaty in 1869, he chose as his home the Warm Valley nestled against the Wind River Mountains.
In time, the 44 million acres of Shoshone land dwindled to 2 million due to the white settlers taking over the land and the treaty not being enforced. Many of the Shoshone died of starvation and disease.


The reservation today is indicative of poverty and disrepair. The cemeteries badly kept.

After a relaxing morning, if you can call doing laundry and changing linens relaxing. Actually I enjoy time in the laundry as I catch up on reading. Anyway we decided to do the drive on White Mountain and hope for a view of wild horses and Pilot Butte Mountain.

The drive from Green River on county Rd 53 or White Mountain Road is around 24 miles and takes 2 hours. The road is dirt and gravel more suitable for a 4 wheel, but decided to do it as John wanted a photo of Pilot Butte Mountain not visable from the highway. The area is supposed to be home to many wild horses, but we only saw 3. Maybe the dry weather has forced them elsewhere. Southern Wyoming is noted for being home to the largest wild horse population in Wyoming.

We started the route in Green River and drove county road 53 to county road 14 and then 191 into Rock Springs.

John got his pictures of Pilot Butte and  I of the wild horses. Made our day.


By the way only passed two vehicles on the drive.
Posted by Amy at 7:27 PM 1 comment:

Left Warren AFB early morning for long drive to Rock Springs via IH 80.
This is not the most scenic part of Wyoming. Goes through somewhat desolate country. Quite frankly not sure how anything can survive. The route passes through Laramie and Rawlins. Enroute we stopped at the Lincoln Memorial at exit 323. Strongly suggest you make this stop and visit the memorial and the visitor center. This is our 3rd time to travel this route.


We arrived at the KOA for 3 nights before heading to HIll AFB in Ogden,UT. Staff very welcoming and the park seemed almost full. Got a nice pull thru site close to laundry and dog park. The park is gravel with a view of the White Mountain just off IH 80 exit 99 and convenient to Rock Springs shopping. I like that the sites are opposite pull thru as this means door to door which gives a more friendly access to your neighbor. We are in site 33.


We have not visited any forts since leaving Illinois as our route back to Oregon is one we have taken before. This is longest John has gone without visiting forts, but has given him time to catch up with his site. Plus it has meant more relax time for us.

As we drove from Colorado Springs to Cheyenne, our thoughts were with the victims and families of 11 September 2001. May we never forget.
God bless them all.

I am sure there are areas of Colorado affected by the downturn, but driving IH 25, there seems to be much development and affluence.
Many new home developments, highrise buildings, shopping centers and just a general overall feeling of a booming area.

Before leaving the campground did get a good sunrise picture. We had great weather with temperatures in the 70's for the most days and cool evenings. However, rain is in need as the landscape is so parched. We didn't do any sightseeing as we did this on our visit in September on the outbound trip in 2011.


When we arrived at Warren AFB it started to rain..a welcome sight as it is very dry here as well. This is our second visit and a very nice small FAMCAMP. $20/day a real bargain for full hookups. Tomorrow will do some needed grocery shopping at the commissary.

Pronghorn are very content to graze on the base. Wyoming has many.
Finally some wildlife photos.


We will be here for 3 nights and then 3 nights at KOA in Rock Springs.
Posted by Amy at 2:32 PM No comments:

After spending 2 nights at the KOA in Goodland,KS we arrived back at Peregrine Pines AFA Fam camp site 77.This is our second stay as we stayed here on our outbound journey last September. This is one of our favorite military campgrounds and the price is great. $20/nt for full hookups,very large sites nestled among the pines at an altitude of 6500. Hopefully this stay I will see a bear or some deer for a photo op. Also the wi-fi is free and very fast.

We will be here for a week..mostly relaxing as we took in most of sights and forts our last visit.

While here we are having the same tech who installed out Satellite, install Winegard antenna system that is more user friendly than the one you have to raise and lower.

From here we travel to FE Warren AFB in Cheyenne for 3 nights, then KOA in Rock Springs for 3 nights, Hill AFB in Ogden,UT for 7 nights,Gowen Air Field in Boise for 2 nights and then arrive in Redmond,OR on the 26th.
Anxious to see Hope,Shawn and grandsons Colt and Cade.

Left Scott AFB this morning for a long, unscenic drive across Missouri on IH70..some 350 miles. We left just in time as the remnants of Isaac are expected tomorrow.

We arrived at the KOA in Topeka around 4PM and wil be here until the 2nd when we leave for Goodland,KS KOA..another long drive on IH70 across Kansas. We are just going to relax during our Kansas stays as we visited many of the forts last year during our stops in Wakeeny and Wichita.

When walking Destiny, came across two baby rabbits or at least I think that what they were. Not sure where the mama was..maybe foraging for food to feed them. Will check on them later during our stay.

This campground is very nice with several small lakes,fenced dog area,store and playground. Clean and friendly..$34/nt. We are in site 13 with full hookups and pull thru.