Markers for Fort LeBoeuf are located in Waterford which is a short drive down Hwy 19.

The first fort was built by the French in 1753 to guard the road into the Ohio Valley. The British built the 2nd fort in 1760 and this was burned to the ground by the Indians in 1763. The  Americans built the 3rd fort in 1794 to protect the settlers.

Judson house built in 1820 was erected on the site of the French fort. 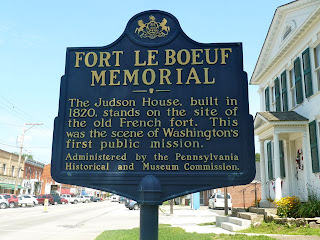 George Washington came here in 1753 carrying orders from the Virginia Governor  to the French to inform them they were trespassing on British soil. There is a statue depicting this next to the Eagle Hotel.

The Eagle Hotel was erected in 1826 and now serves as a restaurant and museum. We had lunch here and believe me it was definitely home cooking. They advertise as Amish type cooking. Everything prepared in the kitchen..nothing processed. The cold slaw and bean soup delicious.
We also had chicken salad sandwich and shared coconut cream pie.