Believe this will be our last fort visit in the area as we have toured within a 100 mile area most of the relevant ones.

Fort Stanwix was established in 1758 during the French and Indian War in Rome, NY and abandoned in 1828. It's purpose was to protect the portage between the Mohawk River and Wood Creek known as the Oneida Carrying Place.

The fort was occupied by American troops in 1776 and besieged by the British in 1777. It burned in 1781 and rebuilt. It fell into disrepair and in 1812 a blockhouse was erected on the parade ground. In 1828 the fort was dismantled.

The site over the years was developed into housing and businesses. A restoration project was undertaken and the fort rebuilt.

It is a very complicated history and if interested urge you to view the site
http://www.nps.gov/fost 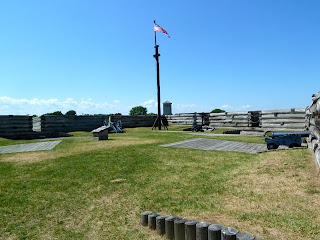